Zoo Curator I Courtney Janney I '03 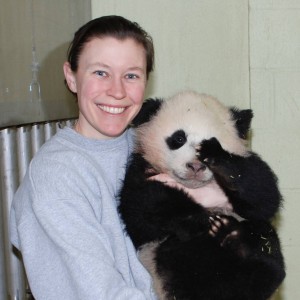 When Courtney Janney was five years old, her teachers asked her to draw a picture of herself decorated with images of what she wanted to be when she grew up. Without pause, Janney sketched herself in a lab coat, caring for tigers—she was a big cat veterinarian.

Two-plus decades later, Janney is the Curator of Large Mammals at the Memphis Zoo. She is in charge of caring for giant pandas, elephants, giraffes and, yes, tigers. Throughout the course of her childhood and four years at Williams, Janney never lost sight of her love for animals. When her coursework steered her towards microbiology and her experiences at vet clinics dealt more with people than animals, Janney refused to settle. Her path to realizing her childhood dream speaks to the power of commitment and the importance of exploration when choosing a career.

I met up with Janney at the Memphis Zoo to hear her story and learn about the day-to-day life of a zookeeper.

When I came to Williams, it was with the assumption that I’d go to vet school. I did internships with vet clinics during two of my Winter Studies, and I found that working as a vet was much more about dealing with people than animals, and that held very little appeal at the time. Embarrassingly, it took until senior year for me to realize how many other options there were for people who want to work with animals.

The summer after junior year, I did an internship in wildlife rehab and that opened my eyes a bit more. That’s when I learned about internships at zoos. The one that seemed to be the best was a place called Fossil Rim in Texas. I applied to work there after graduation and got the job.

In the zoo field if you can find an internship that provides housing, you’re golden because you can make it work from there. I got about $200 a month, which was just enough for food, but it was perfect because I lived in the middle of this 200-acre savanna surrounded by animals. Fossil Rim has savannas where literally herds of wildebeest run by.

From Fossil Rim, I got an internship with Disney focusing on animal behavior research and got a chance to learn a lot about research as it’s applied in zoos.

Towards the end of the internship, I had to decide whether I wanted to do animal care or research. Animal care was the field where you were filthy, but you never had to go to the gym because you were working so hard. Research was wearing clothes that required dry cleaning, sitting at a desk and doing excel. I decided that I never wanted to dry clean clothes again so I chose animal care.

I was there for 5 years, and then I moved to the National Zoo in DC.

This opportunity in Memphis sort of fell into my lap. I went from keeper to curator, which meant that I went from managing zero people to managing 21. When I made the move, my husband asked what it means to be a curator. What it means is that I can do this for the rest of my life. I couldn’t be the type of keeper I was because I would have bad knees and a bad back in a few years. I can be involved in this field for the rest of my career, so I’m pretty excited.

Did you ever regret not going to a more technical program instead of Williams?

This field is one of those where you learn an awful lot on the job. People come into it from all areas.

The thing that Williams really gave me was not so much the classroom stuff, but the lessons in getting along with other people. The biggest contribution to where I am now was entry life. It broadened my mind so that I can do a better job now leading a team of 20 people who all have diverse backgrounds.

What were your daily tasks as a zookeeper?

A zookeeper’s job is essentially to feed, prepare the exhibit, put the animals on exhibit, clean behind the animal, and take care of the animal throughout the day.

Another part is public education—going out and talking to visitors and schools about animals and what’s going on in the wild.

What is life like for you at the Memphis Zoo?

Personally I think the Memphis Zoo has a better collection than Disney or National. We have polar bears. We have elephants. We have all the big cats. There’s always something different going on. You come out of panda birthing season into polar bear birthing season into panda estrus. In the meantime you’re dealing with giraffe babies being born, and elephant artificial inseminations. We’re getting ready to bring rhinos in. I was so wholly under-qualified for this job that I’ll still be learning twenty years from now, which is awesome — I love it.

How have you come to define success?

It’s definitely changed over time. Before I got into the real world, success for me was being financially secure. Now it’s, “Do you feel happy doing what you’re doing?” Work is not work if you love going to it everyday.

What advice would you give Williams students preparing for life after graduation?

Broadly speaking, never underestimate the alumni network. If I ever had anything cross my desk that was from a Williams alum, I would absolutely give it a second look.

For people who are interested in the animal field, look for internships and volunteer. Get as broad an experience in as many different aspects of the animal world as you can.

Organic Farming Icon I Eliot Coleman I ’61
How'd You Get There? MENU