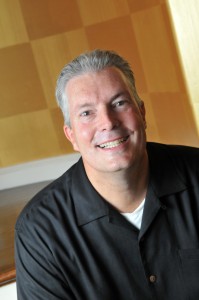 Usually when college students pull all-nighters, they are cramming for an exam or putting the final touches on a paper. As a senior at Williams, David Battey’s late-night study sessions were motivated by more than just a grade—he was writing the blueprint for the rest of his life.

Battey grew up in Prairie Village, Kansas — a middle-class suburb of Kansas City. As a ninth grader, he decided to join the local Presbyterian Church. “Part of joining the church meant getting up every Saturday morning during ninth grade and doing service.”

“My first project was to take a school bus to a poor area of Kansas City and tutor two fifth graders. After the first week, I didn’t want to go back, but it didn’t take me long to figure out that the kids loved seeing me. When I would get off of the school bus, they would come running up to me.”

Inspired by the work he was doing as a tutor, Battey became more outgoing, more confident, more dedicated, and more responsible. He began seeking out other volunteer opportunities everywhere he went. At Williams, Battey participated in a volunteer program in Africa, spent time at a local nursing home, and coached a youth basketball team.

In the spring of his senior year at Williams, Battey and his Political Economy classmates were tasked with the challenge of researching an issue in American culture and crafting a set of policy recommendations to address it. One of Battey’s team members suggested that they look at youth volunteerism.

“At this point, there was no Americorps, and there wasn’t a lot of momentum around national service. At first, the professors said no because it was too narrow a topic. We were able to convince them to let us go with it, and that was critical for me—it gave me an opportunity for the first time to have a professional look at the field. I realized that we have a lot of good volunteer programs out there for kids who are 18 or older, but we don’t have opportunities for the ninth graders.”

As the project progressed, Battey began formulating a plan to return to Kansas City and set up a service program for local high school students. He knew how influential volunteerism had been on his own development and wanted to provide other kids with the same opportunities for service.

As a break between college and trying to start his service program, Battey applied for a Watson Fellowship. When he lost out on the scholarship in the final round, he decided to raise funds for the trip on his own. “I was studying the effects of employee ownership on morale and productivity. I was able to get labor unions to cover some of the expenses, and I got TWA to cover my flights. I was persistent enough that I said, ‘I don’t need their $10,000 to do this thing.’”

When Battey returned from his pseudo-fellowship, he moved back in with his parents and began formulating plans for his service program. He wrote a 2-page concept paper and contacted anyone and everyone he could think of to get their thoughts on the idea—high school principals, non-profit organizers, students, foundations, wealthy donors. “I got a lot of good feedback. Some people told me that they didn’t think it would work, and I appreciated the advice, but I had to tell them, ‘Well, I’m going to try it anyway.’”

One of the biggest pieces of advice Battey got was to launch his program under the umbrella of an existing non-profit. Doing so would give him credibility and resources and save time applying for his own non-profit status. After receiving funding from the United Way and a handful of local agencies, Battey spent five months visiting schools to recruit students. “I specifically wanted a real diverse group of people. Inner city kids see the community needs, and often times they are not asked to serve. Society can view inner city kids as part of the problem, but I see them as part of the solution.”

At the same time, Battey worked on vetting local non-profits. After assurances that he would provide an adult supervisor, Battey received enough applications from non-profits to have a competitive selection process. “The kids were able to choose which agencies they wanted to work with. That forced agencies to work at creating programs that offered real, meaningful experiences for the kids.”

By June of 1987, Battey’s new program—Youth Volunteer Corps—was ready. Nearly 90 kids from all walks of life had signed up to work Monday-Friday for one of two four-week sessions. Five non-profits had created programs, and vans had been reserved to transport kids to and from the work sites.

Battey remembers the first day like it was yesterday. “I got back home to my parents’ house at 5:30. I called one girl — I’m sure she has no memory of this conversation, but I’ll never forget it. I asked her how her day went — I didn’t ask whether she was coming back tomorrow, but that’s what I was thinking. She went on and on about how much she loved the project and the leader and the other kids on her team. When I hung up the phone, I thought, ‘This is incredible. It’s really going to work.’”

Since that day in 1987, Youth Volunteer Corps has worked with over 280,000 kids. The organization now has a presence in thirty cities and will help match more than 20,000 kids with service projects this year alone. Battey has moved from marketer/organizer/van driver to big-picture visionary for YVC. He spends his days traveling the country, raising money, visiting existing YVC chapters, and scouting sites for expansion.

“YVC hasn’t really been a job for me—it’s been much more of a mission. I’m at peace with myself and what I’m doing and how I live and what I’ve tried to do with my life. That’s a real sign of success for me.”

When asked about his advice for Williams students, Battey says, “Do something that excites you. Do something that you want to do, even if it’s unexpected – 27 years later I’m still trying to implement the thesis that my team wrote at Williams.”

You can learn more about Youth Volunteer Corps at http://www.yvc.org

Gospel Singer I David Bass I ’77
Coffee Enthusiast & Café Owner I Julie McGuire I ’88
How'd You Get There? MENU