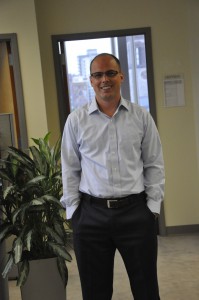 Kevin Bolduc is a vice president at the Center for Effective Philanthropy (CEP) in Cambridge, Massachusetts. Before landing at CEP, he spent two years as a consultant with The Parthenon Group.

Describe the mission of CEP and what makes it unique.

The Center for Effective Philanthropy is a nonprofit organization whose mission is is to provide data and create insight so philanthropic funders can better define, assess, and improve their effectiveness—and, as a result, their intended impact.

Giving money away feels good. But it can be hard to get good feedback about a foundation’s effectiveness. It’s difficult to measure effectiveness, and no one wants to tell a foundation it is doing a bad job. We’ve developed standardized ways to get feedback from people who should know something about the philanthropic work being done—grantees, board members, community stakeholders. Then we go to the foundations to tell them what they are and aren’t good at, and support it with clear research, so that they can be sure they’re achieving what they want to achieve.

How is your specific role defined?

I oversee the design and delivery of these performance assessment tools.

How were you introduced to CEP?

CEP’s first executive director [and current president] worked with me at The Parthenon Group. I was two years out of Williams and planning to go to business school. I had heard a little about CEP and thought it sounded like an intellectual challenge and a great opportunity to build something while applying to schools. CEP had only had nine months of funding and I had only a year to give, so it sounded like a match made in heaven. Nine years later, I’m still here.

Are you ever tempted to go back to school?

Of course I’m tempted. I love school. I love learning. But I really love what I do here.

There have been challenging times—times when we didn’t know whether our ideas would resonate and times when we faced serious financial uncertainty. But that’s entrepreneurialism. You have to be willing to accept that. Also, when you’ve worked on something from day one, it becomes part of you—maybe even a reflection of you. I’m not saying that CEP is a reflection of me, but there are pieces of me in this organization. It’s incredibly rewarding to participate in that kind of creation.

What do enjoy most about your work?

For starters, I think the work I do here is fundamentally important. But what I love most is that there’s always a new challenge. Even nine years in, it retains a sense of entrepreneurialism. It’s also intellectually satisfying. We’re considered a thought leader in the field, and I get to contribute to that discussion. It’s also small, so I know everyone and get to work with everyone. Coming to work is enjoyable.

How did consulting prepare you for what you’re doing now, besides your fancy PowerPoint skills?

Hey, don’t underestimate those skills! PowerPoint is the language that people use in the working world. But additionally, consulting helped me hone my analytical techniques—my ability to frame a problem, figure out ways to approach that problem, gather and synthesize data, and develop actionable recommendations. I also learned about how to interact professionally with clients.

What do you look forward to when you are teaching or working with young people at CEP?

It’s a really fun part of my job. For me, teaching is revitalizing. And the young people I’m teaching are all bright-eyed and energized. It’s invigorating.

You graduated with a degree in biology. How did your thoughts about what you’d do after Williams change during your senior year?

I had the idea that I wanted to be a biology professor—specifically a biology professor at Williams, but I discovered in doing my thesis that I really didn’t love the lab. I loved working with people, but I didn’t like lab work. I threw my hands in the air and said, “What am I going to do?” I decided I should try something else, and for better or worse, an easy route to follow at Williams in 1999 was the consulting route.

The Center for Effective Philanthropy is dedicated to doing good. In what ways did Williams instill a sense of service in you?

I went to Williams on financial aid. I wouldn’t have that opportunity without the generosity of people who came before me.

I also participated in clubs that focused on making Williams a better place. When I went into the world of consulting, and the only thing I was doing was consulting, I missed that. Now service and philanthropy are part of the intent of the work I lead—and I absolutely pin that back to the spirit of community at Williams.

Writer and Performer | Mayda Del Valle | ’00
How'd You Get There? MENU