It often takes years to become an overnight success. By October 2013, Robby Cuthbert, a soft-spoken psychology and art double major, knew he didn’t have a lot of time left before he would have to start looking for a “real job.” He’d spent the last two years creating artistic furniture. The first year he lived with his parents in Pittsfield, working out of their garage and selling small sculptures on Etsy to pay for his materials. Now, living with his girlfriend in Palo Alto, money from a previous Kickstarter campaign running low, he figured he had a few months to see if he could turn his project into a sustainable business — or move on. 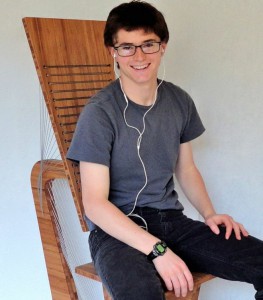 The idea for Cuthbert’s work came from his senior seminar art class at Williams. In search of a capstone project, Cuthbert sought the advice of his professor, Ed Epping. “We were talking about muscles and how they come in pairs and work together,” recalls Cuthbert, “real abstract art stuff, which I’ve never actually been that into.” That conversation led Cuthbert to begin playing around with connecting curved pieces of wood with wire cables. “The idea was that the two pieces of wood are sort of like muscles in an artsy way. Some of the cables are trying to pull them together and some are pulling apart — you end up with something that is totally stable.”

After graduation, Cuthbert liked the direction the project was headed and decided to put off any other plans in order to see it through. His small wire statues had an aesthetic appeal, but no one, including Cuthbert, thought of them as much more than that. “I sort of always assumed that it wouldn’t work out. Leaving Williams, I had no clue what my art would develop into.”

Recognizing the powerful stability of his tension-wire design, Cuthbert sought real world applications for the art and began to apply his technique to furniture. Within six months he’d assembled a coffee table, a few lamps, and a bookshelf.

Unsure how to go about finding customers for his pieces, Cuthbert set up a website. It generated around 100 views a day, “mostly from friends and family through Facebook,” he says. He also put together a small photo album and sent it around to architectural blogs. On a whim, he posted the album on Reddit, a massive user-generated site where posts rise and fall on the homepage based on reader feedback. Within a day, Cuthbert’s album rose all the way to the number one spot. Within 12 hours, 175,000 people had seen his work.

That same day, he received 30 orders; by the end of the week he had over 50. Soon other news sites began posting the album. His work was featured in design magazines and discussed on a variety of blogs. A few weeks later, he was invited to the prestigious Architectural Digest Design Show in New York.

Obscured by the story of Cuthbert’s business success is a story of creation. True to the liberal arts ideal, he believes success is largely a factor of curiosity and eagerness to learn. “The act of creation necessitates learning new skills. When I have an idea, I won’t necessarily know everything that I need in order to make that idea a reality.” Instead of backing down in the face of that unknown, he’s invigorated by opportunities to learn more.

Cuthbert’s advice to students emphasizes the value of the creative process. “If you’re really into your art, it’s important not to jump into a job that’s going to consume all your time and not allow you to explore what you’re really passionate about. Get a waiting job to pay the bills, then spend most of your time working on your idea.”

It took two years of tinkering with his designs for Cuthbert to come up with his first coffee table. It took him another six months before his Reddit album enabled him to begin making money off his work. Along the way, he learned to use design software he’d never encountered at Williams, became adept at setting up and managing a small business, and developed skills in marketing, photography, and logistics.

Even if his album had languished at the bottom of the Reddit site, even if he had been forced to put his projects aside in favor of design school or a move into industry, it’s hard to see those two years as a waste. “It takes a little time to play around with ideas and develop them into something that can be profitable … a year or two or three to see if your passion can lead to some form of more sustainable income.”