Social Entrepreneur I Imran Khoja I ’12

In January 2012, Imran Khoja ’12 and Katy Gathright ’12 won the first ever Williams College Business Plan Competition. Following graduation, they took the prize money and started Designed Good — an online marketplace for socially responsible products. After eight months in Williamstown in an apartment with no heat and many more months struggling to build the company, Khoja is still at the helm of Designed Good.

Having deferred the start of Stanford Business School until the fall of 2015, Khoja is hard at work designing products, managing the website, and learning about what it takes to run a business.

I recently caught up with Khoja in his Boston apartment and learned about the ups and downs of life as a young entrepreneur. 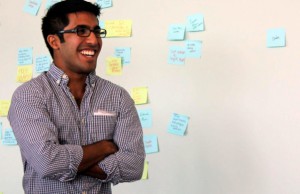 What exactly is Designed Good?
Designed Good started as an online marketplace for socially conscious products. The idea was: We buy lots of stuff in our everyday life, but we don’t think about where those goods come from. What if there was a version of a product you use that did “good” in the world and cost the same price? It’d be awesome to know the story of that product and be empowered by it. DG was made to tell that story in an engaging way.

So you came up with the model, won the Williams business plan competition, and launched the site. What came next?
A lot of learning and failing through that first summer to get things started. Then an exciting fall where we were actually selling things. Then came January where I lost a couple partners (who got more traditional jobs) and had to decide whether it made sense to continue. That was difficult, but I learned a lot. Now my passion has moved from selling other people’s products to more creation.

I got a full-time job working on product development and am turning Designed Good into an incubator for my inventions. I look at Designed Good as having some successes and a lot of failures. The business is struggling, if not failing, but it’s OK because it’s gotten me to a place where I’m a whole lot more mature about what it means to be a business owner.

Going through this process has allowed me to see beyond what I knew originally and discover that I have this deep interest in owning the creation process one hundred percent.

To me the self-discovery is exciting. It’s like peeling back the layers and figuring out what drives and motivates me.

Were there some early ideas that you tried before Designed Good?
I try to approach everything through a lens of experimentation. I started a consignment rack at Nature’s Closet on Spring Street, which was essentially the model for Designed Good. We got items from townspeople and sold them in the store for a cut. Testing that model in an environment with little risk was helpful in giving me confidence that I could do something similar on a larger scale.

One thing I really took advantage of was this idea of being a student — people are so receptive to helping you. I also came at it with this sense of curiosity — I wasn’t someone trying to one-up the world, I was just someone trying to learn.

Did you ever feel pressure to go a more traditional route?
Definitely. At Williams, there is a big consulting contingent and a lot of my friends did that. When you say, “Hey, I’m starting this company that has no funding and has made less revenue than your first-year salary,” people kind of look at you and wonder what you’re doing. I’ve looked at it as following what I’m interested in and working hard on what excites me.

Taking a year to work on a project that you’re passionate about — as long as you catalog what you’re learning — will only help you down the line. You’ll eventually know more about what you’re interested in, what you’re good at, what you care about. You’ll have contacts in areas you didn’t know about before, and they’ll help open doors for you because they know that you’re capable and smart.

There’s a mystique around young entrepreneurs as people who live fast and make it big. What’s it really like?
Really tough a lot of the time. For the first eight months, I lived in a $300-per-month apartment in Williamstown that had no heat. I would visit friends in New York and Boston and sometimes ask myself why I was doing this.

The fact is that starting a business is hard. Finding peers who are entrepreneurs like you is huge because you can talk about the challenges and they understand.

What role did Williams play in your journey?
At Williams, I learned how to approach any subject and become an expert in it. Communication and writing are also very important. Raising money or building a product is all about communication.

Finally, this idea of curiosity and lifelong learning is huge. Being able to approach a difficult topic without getting discouraged is something Williams teaches you.

Do you have any advice for current students who are thinking about starting their own business?
Starting a business is really hard, but it can also be really fun. There’s no good time for starting a business, so if you’re passionate about it you should just start.

That said, you can be smart about how you start something. Think about it as, “What’s the smallest experiment I can do to test this idea out?” Plan out the appropriate amount of resources — both time and money — that you can devote to your idea and see where it goes. Doing that builds momentum and allows you to learn and grow. From there, you can decide that running a business is what you want to do with the majority of your time and really dive in.

Critically engaging and continuing to try new things and learn about new processes is what will allow you to get to a point down the line where you’re like, “Hey, I really know what I want to do,” but don’t feel pressured if that doesn’t come right away.

Political Campaigner | Dave Marsh | ’12
Sports Executive I Will Kuntz I ’06
How'd You Get There? MENU