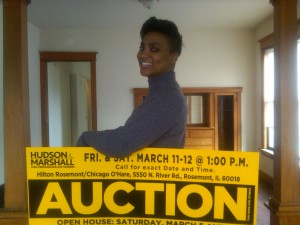 Akilah Rogers is an entrepreneur and real estate developer based in Chicago. She created her company, Rogers Empire, in the final semester of her M.B.A. program at Harvard.

What is the Rogers Empire?

It’s a real estate company. I buy foreclosed properties on the south side of Chicago (in Englewood), fix them up and rent them out to Section-8 tenants, with the ultimate plan of flipping some of the houses in five to seven years.

How did it get started?
I started it with my father, Steven Rogers (’79), two months before I finished business school, and then about two months after I graduated he decided that he should just be a father and business advisor and gave me 100 percent ownership of the company.
My father used to own these empty lots in Englewood, and I used to think about things we could do with them. Then, the summer between my first and second year of business school, I worked for Disney’s real estate group and I learned a lot about real estate development. I approached my dad with the idea of going into business together. He saw that there were a lot of foreclosures with the onset of the recession and felt we could really do something.

So it’s in the genes?
I’ve definitely followed in my family’s footsteps. Both of my parents went to Williams and then Harvard Business School [Akilah’s mother is Michele Rogers, ’79].

Did people say you were crazy to start a business during a recession?
The recession actually helps my business. I buy foreclosed properties, and because of the recession, I have an enormous supply. I buy single-family homes for between $3,000 and $25,000 because the banks want to get them off their books. So the recession made this all possible. Opportunity is all about time and luck, and also being ready and prepared.

Were you always interested in real estate?
I always knew I’d have my own business, but I wasn’t sure what it would be. I worked for an asset management company, Ariel Mutual Funds, right after graduating from Williams. I had access to the CEO, who started the company at 24 years old, and that really shaped me. And then I went to business school, the kind of place where the world becomes your oyster.

Had you started any other businesses before Rogers Empire?
As a kid I ran a few lemonade stands and started a company called Bead It, where some friends and I made bracelets and necklaces. I always enjoyed starting programs. In business school, I started a group for black women called We Can Have It All, because there’s a question out there of whether you can have a successful professional and personal life.

So do you have it all?
No! That’s why I didn’t teach the program. But I plan to get there one day

What do find fulfilling about life as an entrepreneur?
I think I’m very imaginative, which is surprising because I wouldn’t have thought that about myself. I’m not Willy Wonka-creative, but I’ve always had ideas of things I wanted to do or see or be. It’s about having a vision. As a visionary, the best thing you can do is start something, but you also have to see it through.

What’s your day-to-day life like?
Now that my younger sister, Ariel Rogers (Princeton, ’08) and Janay Clyde (Williams, ’10) work with me, I have a lot less on my plate. Before they started, my day would be something like: go show two houses to potential tenants, go sign leases with tenants who are moving in, go check on the contractors doing renovation work, go do paperwork. Now, I work more on strategy, and figuring out how to grow the company in the most effective and cost-effective way.

You were an athlete at Williams. How did that influence you in life after college?
I played volleyball and when I started, we were the underdogs. Coach Fran Vandermeer was the new coach and after one season, we became the team to beat. To be a part of a winning organization creates a winning mentality and a strong work ethic. That carries over into life. I believe that when you work hard, you win.
I also learned a lot about leadership when I was in Nothin’ But Cuties (NBC), founded by my good friend William Green, ’03, at Williams. I became a leader as a junior and at first I led with an iron fist. That didn’t go over well. I learned that just as there different types of people, there are different styles of leadership. You have to understand the people you are leading.

How do you think your classmates influenced you at Williams?
Williams has the smartest people in the universe! Like E=mc2 smart, but also really deep thinkers. And to be around smart people that love to learn really pushes you. It’s not just about grades. These are people who want to learn and share and discuss and debate.

How has the Williams network been a part of your life since graduation?
My closest friends are Williams people. My only non-family member employee went to Williams and I found her through my father—another Williams grad. So, yes, the network is strong! There are a lot of successful African-Americans from Williams, and I’ve been lucky enough to be surrounded by them. Terri Williams, ’03 earned her Ph.D. by the age of 25, Nikiya Asamoah, ’03 is in her residency to be a doctor, Maurice Robinson, ’06 founded a mediation company, is a college professor, and mediates at New York City courts. There are also so many mentors and people to look up to that graduated from Williams, and that has helped me feel encouraged and supported. If you stay a part of this network, you can’t help but strive to be your own best self.