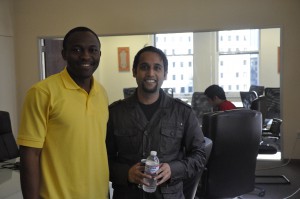 Prosper Nwankpa and Murti Hussain are web entrepreneurs and founders of Peanut Labs, a company that creates embeddable surveys for social media sites like Facebook.

Your business has evolved over time, but what is Peanut Labs today?

PN: There are two parts to our business. The first is related to social networking. We monetize the networks. We turn their people into money. The second is related to market research. We give brands and businesses access to people using social media and games.

How did you get started? And where does a peanut fit into all of this?

PN: When we launched our social networking site called Xuqa.com, the site had these peanuts, a kind of virtual currency you could accumulate and use to play games or buy virtual gifts. We saw that this was really popular and that people liked collecting them. Initially, we gave peanuts to people when they did more activity on the site. Then we introduced surveys, which paid users with peanuts. People loved it! When they ran out of peanuts, they’d take more surveys.

It worked because market researchers couldn’t figure out how to reach young people through social networks, but we figured out a way.

Also, we provided a way for people to have fun when taking surveys online. The value of the virtual currency you get from taking a survey is huge.

MH: It’s kind of like frequent flyer miles. People do crazy things to earn miles. Virtual currency and social gaming has become a phenomenon. There are probably about 300 million people around the world playing these games.

Can you describe the group’s first ventures into the world of start-ups?

PN: We built a site called Hotcampusparties.com, which we launched at Williams. It was an events and party calendar. And about 2,000 people signed up for it in the first two days. But then we realized that people who like to party don’t tend go to a website to find out about them.

MH: Instead campus security tends to go to the site.

PN: So we turned that into a social calendar called iventster.com, where you could input your classes and meetings. When we launched, we did some pretty cool viral marketing and got 300,000 users to sign up over the course of three weeks. We camped out at Jessup in Room 206. Our wireless password in our office is “jessup206,” because that’s where it all started.

How did you end up in San Francisco?

PN: The Ivenster site wasn’t successful, but it showed initial promise and put us on the map with some investors. One of them called us one day to ask if we were looking for funding. At the time, we had found some Williamstown doctors and dentists to contribute to a friends and family financing round. But this investor called us up, flew us to San Francisco, and gave us some start-up money, and we liked it so much that we decided to stay.

What motivates you to take risks?

MH: We started off with zero. We are both from developing countries. Our families are modest. There isn’t much to lose. At the end of the day, the lifestyle of being an entrepreneur is really fulfilling. If I put in 100 hours, it’s because I want to and I enjoy it.

What do you find fulfilling about starting a business?

PN: The prospect of building something new and cool that wasn’t there before. Taking something from zero to a few million dollars.

MH: I like building stuff, whether it’s a model airplane or a company.

What do you wish you had learned in school to prepare you for life as an entrepreneur?

MH: There are so many things you need to succeed in the real world that school does not teach you. You need management and people skills. It’s hard to teach those in a class, but there are some great books that have helped me, by authors like Richard Branson and Malcolm Gladwell.

How has a liberal arts education benefited you?

PN: Being able to express yourself is very important. If you’re writing a speech or trying to convince someone that your product is cool—basically building an argument—you have to know how to write.

Did any of your courses at Williams surprise you, or affect your career in unexpected ways?

PN: There was this entrepreneur class over Winter Study taught by a serial entrepreneur, who was very confident that if you wanted to, you could go out there and build something. That was my first exposure to entrepreneurship. I got the bug. One way or another, I decided I wanted to build something. And that class is where it started.