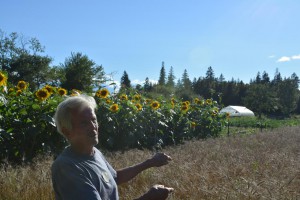 Eliot Coleman was alive — that much he was sure of. He lay still and tried to assess the damage — a few broken ribs, some road rash, a concussion, maybe a punctured lung. He glanced down at the IV connected to his arm and then towards the hall in search of someone who could tell him how long he’d be stuck like this.

Coleman was a few months away from starting his final year at Williams. He’d spent the previous twenty-one years in a dizzying state of activity—hiking, rock climbing, and whitewater kayaking in the summers, skiing and skating in the winters. At Williams, Coleman had the reputation of a daredevil. For him, academics were a sideshow—something to get through but not obsess over.

But now, for the first time in his life, Coleman was bedridden. A few hours earlier, he had crashed his motorcycle, and no amount of trying was going to heal his body anytime soon.

Now a world-renowned farmer and author, who is a favorite of Michael Pollan and Martha Stewart, Coleman traces the origins of his successes to his two-month stay in the hospital. “It wasn’t until after my motorcycle accident when I had time to investigate myself that I said, ‘I’m wasting my time. Why aren’t I using my mind better?’”

“I’d always been passionate about things that interested me. I had every book that existed on whitewater kayaking.” After the crash, Coleman wanted to learn about other things as well—science and math and history. He began reading everything he could, first out of boredom in the hospital, and then out of pure curiosity.

Coleman wanted to live close to nature, wanted to wake up and feel inspired and go to bed feeling fulfilled. He had observed the way his father, a Wall Street broker, seemed to live for the weekends, and he wanted something different. “My father gave us all a good life, but [being a broker] was never his passion.”

After graduation, Coleman got a master’s degree in Spanish Literature and accepted a job at Franconia College, a new, experimental university in the heart of New Hampshire’s White Mountains.

One day, in search of food to fuel his upcoming ski racing season, Coleman stumbled upon a health food store. Mixed among the aisles of groceries, the store “had a lending library of all sorts of crazy books. I took a book, read it overnight, and came back the next day.” This went on for weeks, until one day, Coleman selected a copy of “Living the Good Life” by Helen and Scott Nearing. The book railed against the woes of modern capitalism and encouraged mankind to return to the land as small-scale farmers.

The Nearings’ words struck a chord with Coleman. “I really got into the idea of homesteading and growing your own food and the adventure of survival. I went to visit the Nearings and so began what my mother referred to as ‘when I went crazy.’”

Coleman left his teaching job, and with his first wife, began searching for a plot of land to farm. “We were driving around New England looking at farm properties, and we couldn’t afford any of them. The Nearings said, ‘We’re not using the back half of our place, why don’t you buy that?’ It was all forest, but I said, ‘Sure, I want an adventure, and this is right up there.’”

For years, Coleman spent his days clearing tree stumps, planting seedlings, and assembling a small shelter. He had no running water and no electricity. “One day, I was chopping out a stump and a neighbor came by. He said, ‘Golly, that looks like a lot of work.’ I said, ‘Well, I used to go on mountaineering expeditions for fun. I’d spend all day chopping steps on a vertical icy cliff with a 70-pound pack on my back. Compared with that, this is easy.’”

In addition to the backbreaking work, Coleman began learning as much as he could about organic farming. “When I was teaching at Franconia College, I would go down to the Dartmouth library. I read every book they had about agriculture. The French and Germans were doing some of the most interesting work with organic agriculture so I learned enough French and German to understand those.” On weekends, Coleman would travel to the University of Maine to read agricultural research papers.

Possessing no prior farming experience, Coleman applied the techniques he read about to his fields. He also designed his own experiments, carefully recording the effects different growing conditions had on his crops. “At the start, we would take a field, and I would till horse manure in one section and autumn leaves in another, and seaweed in another. The next year, I would cross plant every vegetable I was interested in.”

As Coleman read and worked more, he became even more convinced that organic farming could work. “My experience is that the natural world is the most elegantly designed thing, and that if I want to work with it, I need to pay attention and understand that design.”

For over four decades, Coleman has strived to refine his practices and share his experience with others. In the midst of a rising tide of GMOs and chemical fertilizers, Coleman’s farm stands as a beacon for the organic movement. In forty years, Coleman has transformed the rocky, acidic soil he bought from the Nearings into a prosperous 20-acre farm. His techniques, which are described in his three widely read books, have revolutionized organic farming and inspired hundreds to follow in his footsteps.

When asked about his advice for current students, Coleman emphasized the value of learning and exploring. “There is one word that students need to know and use endlessly: why. If you ask it enough, maybe you’ll get down to the hardcore, stainless steel truth.”

You can learn more about Coleman’s farm and order his books at http://www.fourseasonfarm.com

College President I Mary Hinton I ’92
Zoo Curator I Courtney Janney I ’03
How'd You Get There? MENU