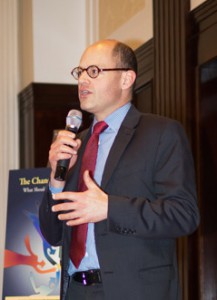 How do you distinguish between wanting to study something and wanting to do something? If you are passionate about an aspect of the human experience, should you spend your time understanding it or being directly engaged in it?

Andrew Seligsohn grappled with those questions throughout his time at Williams and for 15 years after graduation. Politically inclined from a young age, Seligsohn’s early adult life was defined by a struggle between politics in theory and politics in action. In college, he spent his summers volunteering on campaigns and interning with legislators, but then spent the rest of the year tucked away in the library. The same uneasy divide between thought and action existed throughout his years as a graduate student and seven more as a tenure-track professor.

Over time, Seligsohn realized he had to make a change. After stumbling upon an ad for a civic engagement job, he abandoned his tenured post to begin identifying ways for universities to better their communities.

Now, ten years later, Seligsohn is in charge of Campus Compact—an organization that works to promote community service and service-based learning at its more than 1,100 member colleges and universities.

I caught up with Seligsohn in his Boston office to learn about Campus Compact and hear about his journey from the classroom to the community.

After graduation, I went to New York, was put in charge of an elementary school classroom, and realized within 48 hours that it was a total disaster and that I had no idea what I was doing. I said to the principal, “This was a huge mistake.” It was incredibly demoralizing—I felt like an enormous failure.

After that, I got a job at Scholastic News, a newspaper for elementary school students, and spent a lot of time thinking about what I wanted to do.

I decided that I did want to teach, but at the college level. I went to graduate school in Political Theory at the University of Minnesota.

I completed the PhD and got a tenure track position at Hartwick College. While I was there, a colleague and I took a group of students to New Hampshire to immerse them in the 2004 New Hampshire primaries. For three weeks, the students worked on campaigns, read literature on presidential primaries, and attended rallies for a bunch of different candidates. It was a really exciting environment, and the students loved it. I realized that this was a style of teaching that was much more exciting to me.

A few years later, I happened to see a posting for a job at Princeton as Director of Civic Engagement Learning. I got the job and spent three years there.

At a social event, I met a VP at Rutgers-Camden who heard about what I was doing and suggested that I apply for a job as Director of Civic Engagement to help the campus connect with the community. Camden is one the poorest and most violent cities in the US. The Chancellor was interested in figuring out how to leverage the resources of the university to lift up the community.

I worked in Camden for four and a half years, developing pathways for students and faculty to get involved with community projects. I built the program to a point where I felt like it was sustainable, and then this opportunity at Campus Compact arose, which was about taking the same work I’d been doing to a national audience.

Were you aware of the division between thought and action while you were in college and graduate school?

I became more and more troubled by it over time. Until you’re in a professional setting, it doesn’t occur to you how much of your life is spent on your job. You might think, “I’ll do this for a job, but I’ll do all these other things too.” It’s pretty hard to do those other things. That’s especially true for academics.

Were there any moments of doubt when you gave up your tenured position?

Many people thought I was nuts. The idea that right when I got tenure, I’d leave, was very strange. I realized that a guarantee of lifetime employment was great if you really want that job for the rest of your life, but if you’ve decided that there’s something else you’d rather be doing, the fact that you could have that job forever is not such a powerful motivator.

Are there any moments that stand out where you saw the impact of your work on the community?

I never want to exaggerate the impact of the work. You’re in contexts where there are big, complex problems, and you hope things you’re doing are pushing in the right direction, but it’s really hard to know for certain that you’ve made a difference.

At Rutgers, we were able to get a grant from New Jersey to run after-school programs near campus. Our program served 300 kids throughout the school year. Students worked in the program and different departments would come in to do educational units.

We also supported student initiatives. Students realized that many of the parents of the children in the school didn’t speak English, so they created a program to teach ESL to the parents.

A lot of the work was changing the relationship between the community and the campus so that kids growing up in Camden would think of Rutgers and college generally as a place that they were connected to.

What are your goals for Campus Compact?

For me, the next phase of the organization’s mission is about making the case that higher education institutions can make a difference in community issues.

We’re focused on projects where we can measure impact and demonstrate the benefits of models with the hope of using those early cases to promote adoption.

One example is a program called Connect to Complete. A lot of students who start 2-year colleges have to take remedial classes before they can earn college credit. Those courses are a critical moment where either students advance to a 2-year college, which can set them up for success, or they drop out and are left with a lot of debt. Our project integrates service learning and peer mentoring into those courses. We’ve worked with community colleges to train faculty to do the work, and we’ve been looking at what happens to students who participate in the program. So far, it looks like they are more likely to do well in college and advance to the credit bearing courses.

What advice would you give to a current student preparing for life after graduation?

It’s important to be realistic about the activities you enjoy engaging in. People think about compensation, status, and whether the job is connected to something they care about, but often pay less attention to what they’ll actually be doing all day long. Is that work that you’ll actually like doing?

Ask people questions about their work and shadow people as often as you can.

You also have to have lots of things you like outside of work. At every step of the way, all of the thinking about my life took place in dialogue with my partner, Martina Anderson ’89. Martina and I met a few days into our first year at Williams, in the fall of 1985, and our lives have been intertwined ever since. It would be hard to advise people to get as lucky as I did in finding a partner or spouse. But I think it is worth reminding people to listen to those who know us best.

You can learn more about Campus Compact and Seligsohn’s work at http://www.campuscompact.org

Anthropologist I Catherine Bolten I ’98
Gospel Singer I David Bass I ’77
How'd You Get There? MENU