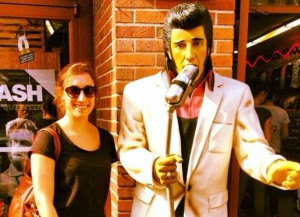 Before her senior year, Katie Holmes had never been to Nashville. When she arrived a few weeks after graduation, she didn’t know anyone within a 100-mile radius. She had no job, no friends, no sense of what might come next.

You expect this story from an upstart musician looking to make it big—a starry-eyed teenager from small town America who arrives with nothing but a guitar. Outside of some shower singing, however, Holmes had never been much of a performer. She was a soft-spoken art history and psychology major. Instead of striving to become the next big thing, Holmes was hoping to find a role in the background.

Two weeks after her journey south, Holmes was offered a job as a project manager with a record label/marketing firm. She leapt at the offer and has not looked back.

Two years later, Holmes is at home in Nashville, working alongside some of her favorite artists and attending multiple concerts a week.

I caught up with Holmes to hear about her journey into the music world and to learn about the ups and downs associated with creating a life in a new city.

How did you get started in the music industry?

Growing up I always really liked music. I wanted to be a singer, but my parents vetoed that. In high school, I started reviewing CDs for one of my teachers. You’d review the CD in exchange for a free copy.

I didn’t do much with music in college aside from two summer internships. After sophomore year, I worked with the hip-hop station in St. Louis, and after junior year, I worked with Sony’s international digital marketing department. Those opportunities were really fun and eye-opening in terms of the range of careers available in music.

Senior year, when I was trying to figure out what to do after graduation, music was kind of the only thing I could think of. I didn’t want to go to New York or LA, so I settled on Nashville.

Basically, I started emailing everyone I could who was in the music industry. I moved to town in July after my senior year and started doing informational interviews. I interviewed with my current boss and got a call two weeks later and was offered a job. I’ve been there ever since.

My company is part digital record label and part marketing firm. I’m a project manager, so I handle 6-8 client accounts each day. I manage their digital marketing and social media accounts and strategize ways to reach the most fans. I tell them how to use ads and websites, how to send out email blasts. I set up casting calls—really anything and everything that they need. Some of the best moments are going to studios and watching my favorite artists record.

Did you have a sense when you were at Williams of what you wanted to do after graduation?

I thought about a lot of things, but I always assumed I’d figure it out when I had to. I never thought that working in the music industry was a possibility until after the radio station internship. After that, music was the only thing I considered.

What was it like moving to Nashville without any prior connections?

It was terrifying—but also really exciting. When I moved in July, I didn’t know anyone. Luckily, I got a job pretty quickly so I was able to find a family there, but branching out and going to shows by yourself is all part of it. Coming from Williams, which was such a comfortable place for me, it took a lot to push myself to do something different and come here and do it alone. I’m really happy with the results—I have awesome friends and two great roommates.

The best thing I’ve learned is that if you’re scared of something, just do it anyway. I’ve learned to be comfortable being uncomfortable, as weird as that sounds.

How did Williams prepare you for working in the music industry?

Having a liberal arts degree, especially from a school like Williams, makes me a unique candidate. That was something I heard over and over again when I was doing the informational interviews. People were like, “You didn’t go to Belmont or Vanderbilt, but that’s ok because we’re not looking for people who are all the same. We want people with new ideas who can bring new things to the table.”

Going to Williams, you’re constantly asked to think. You can’t just sit there and quietly take notes. You have to participate and be a part of whatever you’re doing whether that’s in class or outside of class. That served me well both in my job and in networking when I moved here.

What advice would you give to Williams students who are preparing for life after graduation?

For people who want to go into music: network your ass off. I remember spending more time sending emails my senior year than I did on my homework. Another thing is that if you’re looking for a job, don’t ask for a job. Asking people about their story and how they got where they are was so much more helpful than saying, “Hey, I’m looking for a job.” You get to know them, but they also get to see how interested you are in their path.

Coffee Enthusiast & Café Owner I Julie McGuire I ’88
Nonprofit Financial Services I Liz Kellison I ’87
How'd You Get There? MENU