Media Marketer-Musician I Tom Sikes I '11 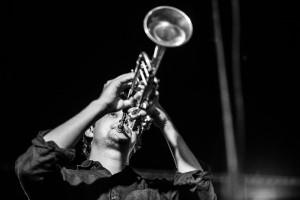 It’s easy to think of your first job as a tradeoff between money and passion. Either sell out for something stable and secure or eke out a meager existence doing what you love. We tell ourselves that work is supposed to be a grind—that a lucky few are blessed with the talent and good fortune to make millions following their passions, but that, for the rest of us, chasing a dream is an inherently risky and poverty-ridden path.

But what if that way of thinking is wrong? What if you could find a steady job that not only supported your financial needs but enabled and even encouraged you to pursue deeper passions? Tom Sikes, the musician/ad salesman, will tell you that with enough patience and research, exploring a creative endeavor does not require breaking the bank nor working for it.

Sikes began playing music when he was in the fourth grade. In high school, he and some friends formed a six-piece band called Great Caesar. On weekends they’d jet off to New York and play gigs in bars across the city. “We were so young,” Sikes recalls, that “they’d make us wait outside until it was our turn to play, and then we’d have to run onstage, play our set, and get ushered out.” Throughout college, the band would reassemble on weekends in Boston or New York for recording sessions and shows.

As Sikes neared graduation, he faced a choice: continue to pursue music or move on. Like many Williams students, Sikes felt pressured to go towards a conventional career. “I was pretty caught up in doing what I thought I was supposed to do and what I saw my classmates doing. It felt like the only acceptable career paths were doctor, lawyer, banker, or consultant.”

Sikes knew that playing in the band could not support rent payments, but he also wasn’t ready to give up on his childhood dreams. So he found a third option. After graduation Sikes followed the band to New York and began looking for a day job. “Rather than choose a company and go there, I decided to choose a place and a lifestyle and then find a job to fit that—somewhere with a supportive community that looked at its employees’ lives holistically.”

Shortly after arriving in New York, Sikes found a job working as an ad salesman for SmartBrief, a media publisher whose CEO is a Williams alum. “The job fits well with the music. It’s steady and rewarding and pays the bills, but isn’t so overwhelming that it keeps me away from the band.”

More than simply paying the bills, Sikes has found his job integral to the band’s success. His coworkers have become some of the band’s biggest fans. Management has stepped in to invest in many of the band’s projects, and when Sikes told his boss that he was going on a six-week-long national tour this fall, his boss told him to have fun and get his work done however he could.

Over the course of his three and a half years with SmartBrief, the band’s popularity has taken off. This past spring they raised $50,000 on Kickstarter to produce a music video for their song “Don’t Ask Me Why.” The video, which was an inspirational story comparing the struggle of an interracial couple in the ’60s with two homosexual couples today, has been viewed by over a quarter of a million people. In the week after its release, it appeared on the news site Upworthy and was tweeted about by celebrities like Russell Simmons and Wyclef Jean.

On the heels of the video, the band was invited to speak and perform at events around the country. In July, they were flown out to Los Angeles to speak at a TED Talk on their use of crowd-sourcing as a way of raising money and engaging with fans. Through that, they made connections with a number of tech companies and performance venues for the western leg of their tour.

While Sikes believes the band is close to becoming something like a full-time opportunity, he’s happy allowing that to happen organically. “I used to joke with my boss that I would put in my two weeks’ notice the day Great Caesar passes SmartBrief in Twitter followers. But because I’ve found work that supports the other things I do with my life, I don’t have to rush to get to that point.”

“Almost at a subconscious level, it’s beaten into you that [artistic pursuits] are riskier and that you have to decide right off the bat to do something creative or not. You think you have to take some blind leap right away and live off your parents’ bank account until you’re 29. I think my biggest lesson is that it doesn’t have to be like that. It wasn’t until I left college that I realized it’s not that black and white.”

Instead of stressing about climbing up a corporate ladder right away, Sikes suggests being brutally honest with yourself about how you want to spend your days and building a life based on that. “I guess my advice would be to breathe and slow down. Even in New York City, which is probably the hardest place in America to pay rent and stay afloat, I’ve seen people do it a million different ways. And all those concerns about building your resume and wasting your education by not taking a traditional career path — they tend to fade pretty quickly once you’re out doing something you enjoy.”

You can learn more about Sikes’ band, Great Caesar, at their website http://www.greatcaesarband.com

Nonprofit Tax Assistance I Sarah Louise Smith I ’06
College President I Mary Hinton I ’92
How'd You Get There? MENU