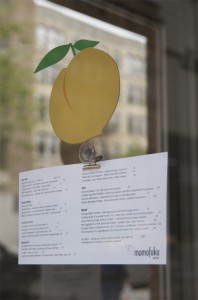 What is your title?

I’m a line cook – a tournant – which means I work at as many stations as possible on a given shift.

You’ve worked at Momofuku for one year. Did you start as a tournant?

No. I was making buns. You have to “trail” first. You work a stint at each station, until you master each one.

Tell me about the day-to-day of your job.

How were you introduced to cooking?

I was 12 years old and my mom was working. I’d come home from school and plan dinner. My mom enjoyed it and I liked it, too.

Did you cook at Williams?

I used to make soup all the time. And I started working at Mezze my junior year.

After graduation, what was your first step?

I’m pretty down on culinary school. It gets you in the door, but I could have gotten a job at a restaurant and learned a lot more than in the two years I spent learning how to cut vegetables. It did solidify my commitment to cooking, though. As soon as I got there, I knew what I wanted to do for the rest of my life.

What makes your job a good fit?

There are three things. One is that on a yearly basis I have ultimate freedom. I am free to move wherever I want, whenever I want, because a cook can almost always find a job. The second is that it allows me to be super-intense while I’m working—passionate, involved, expending so much energy—but when I’m not working, I can relax. My days off are really days off. It’s like appreciating spring after a long winter. The third is that I love to cook. So even when I’m working, I’m doing something I love.

What makes you a good cook?

I have a competitive side. I want to be better than the person who came before me. We talk a lot of trash in the kitchen, and I always want to back that up with some good food.

What’s the most fun part of it all?

When it’s busy and we pull off something great and we’re not too tired at the end of the day to celebrate.

What are the challenges?

To be a cook, you have to have a decent amount of confidence in the kitchen. You have to think you’ll succeed. And when you first start out, nothing makes you think you’ll succeed. Everyone above you thinks you’re an idiot; and they set you up to fail because they want to test you and make you better. So every day you lose confidence. That’s the hardest part. But I believe that if you love something, you have to go through some tough times.

Was your decision to become a chef affected by your liberal arts education?

I wouldn’t give up the Williams education for anything; it’s the greatest kind of education you can get. I think it made me very open-minded and gave me a sense of freedom to do something different. It enriches the approach with which I go into anything. Also, if I open my own place, it will give me a leg up—like 15-fold!

Any final advice for people interested in what you’re doing?

Be willing to take chances. Going to Williams doesn’t mean you have to be a doctor, lawyer or investment banker. Also, stick things out. Just because you get frustrated or sometimes hate your job, doesn’t necessarily mean you’re not doing what you love or what ultimately will make you happy.