International Journalist I Sally Mairs I '13

Before she set foot on the Williams campus, Sally Mairs ’13 had it figured out. An avid reader with a passion for lively debate, Mairs had decided long before college that she was destined for a life in academia. “At Williams, I was completely set on English graduate school, and because of that I didn’t really explore other career options. I took a lot of English classes and spent my summers working at outdoor camps because I didn’t feel like I needed to do anything career oriented.”

Midway through her junior year, however, Mairs started to question that assumption. “I realized that the academic world, especially English, might be too insular for me.” That realization left Mairs in a panic. If not English, what would she do? What could she do? “I was thrown into this mentality of, ‘Oh my God, I don’t have any other skill sets. I’m about to graduate, and all I know is fictional stories and characters.’” 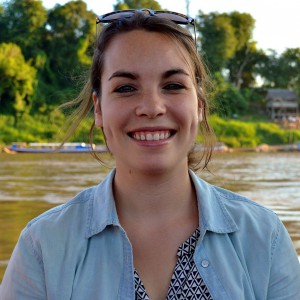 During the fall of her senior year, while her friends were busy applying for jobs and graduate school, Mairs was starting over. In hopes of finding a career more closely aligned with her interests, Mairs made a list of things she liked to do. “Deep down I was still interested in stories and writing. That led me to journalism — real stories that are engaged with the real world. It felt like my best ‘bad’ option. There wasn’t anything really calling to me.”

The prospect of finding a job in a highly competitive field was similarly intimidating. “I had friends who’d studied journalism at NYU who’d done internships every semester. I felt really behind and really overwhelmed.”

In her senior fall, Mairs launched a radio show with a friend on WCFM. The show was more for fun than resume building, but it allowed Mairs to test journalism on a small scale. She began reaching out to professional news outlets, and NPR’s Albany affiliate was the first to respond. Though the station didn’t have a formal internship program, the news director agreed to bring Mairs on board during Winter Study. “I commuted to Albany for the month of January. Working there allowed me to get my foot in the door, and I was able to build off of that.”

After graduating Mairs spent seven months working for NPR stations in Cape Cod and Boston. While she enjoyed the work, she longed for adventure. “The only thing I knew is that I wanted to be abroad. I decided to leave my job and go to Thailand because I had a friend living there who offered me a place to stay.”

With no job, no connections, limited savings and no return ticket, Mairs left for Bangkok in January of 2014. “A few weeks before Mairs arrived, Thailand’s political system had begun to unravel. Mass anti-government street protests broke out, paralyzing the capital and claiming nearly 30 lives.

Almost every journalist that I talked to told me that if I wanted to start covering stories abroad, I needed to just go do it. The cool thing about journalism is that no one cares about your experience or how many jobs you’ve had. All that matters is your content. If you can write something well, no one cares if it’s your first story.”

While Mairs originally intended to stay for a month or two, the turbulent political climate offered the perfect setting for an aspiring journalist. She worked for a month on a freelance basis before accepting a full-time position with a newly-formed English news outlet.

Shortly after Mairs started in her new role, the long-anticipated military crackdown took place. In the middle of the night on May 20, the army instituted martial law. Two days later, the generals staged a coup. “That really caught everyone, including me, by surprise. I woke up to texts and emails from everyone in the States asking if I was ok. I had no idea what was going on.”

Since then, Mairs has reported on the coup’s ramifications across the country. She has met with high-ranking officials, covered “illegal” protests, and spoken to hundreds of ordinary Thai citizens. Because the military has officially banned critical coverage, Mairs’ news site has emerged as one of the only sources challenging the military’s authoritarian rule.

For Mairs, journalism has changed from “the best worst option” to a fascinating career. “My experience in Thailand has been so rich because of my job. I get to talk to people who I’d never get a chance to speak to if I was doing anything else.”

While she’s not sure where she’ll be in five or ten years, Mairs is happy that she chose journalism as her first job and encourages others to do the same. “It’s a career made for a liberal arts student — it’s all about being curious and social, being perceptive and asking the right questions.”

Mairs also stresses the value of pushing outside the comfort zone. “Take advantage of the first few years after college and do something adventurous. People worry too much about establishing themselves right away. When you talk to successful people, they often say that they didn’t get into whatever they’re doing until much later.”

After thinking back to her struggle as a Williams senior, when she couldn’t imagine any career truly satisfying her, she offered a final piece of advice: “Don’t take being 23 and 24 too seriously. You’ll have the rest of your life for that.”

Click here to read one of Mairs’ stories that was featured in Vice.

Filmmaker I Rachel Kessler I ’13
The Geologist Designer I Carissa Carter I ’01
How'd You Get There? MENU