Gospel Singer I David Bass I '77 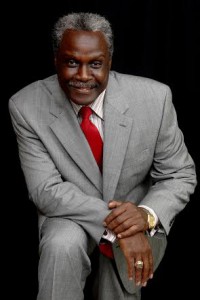 In the corner of the crowded bar, Bass took a deep breath and pushed his way to the stage. On the surface, this was an ordinary event — a midweek open mic night at the Peppermint Lounge, a dive bar a few miles north of New York City. The audience was an eclectic mix—bankers and artists, businessmen and wanderers. They were here for a few drinks and a few laughs—no one was looking for the next Jimi Hendrix.

To Bass, however, this was much more than a one-song show for a few dozen strangers. This was his proving ground. Either he had what it took to make it as a professional singer or he didn’t. “I figured that a crowd like that, once they had a lot of alcohol, would be brutally honest. The experiment was to get up and see if I could win over the crowd with something they wanted to hear, and then win them over with a gospel song.” Gospel music, after all, was his true passion.

Bass got up, sang his song, and left the club. He lived over the river in New Jersey and had to be at work early the next morning. “When I went back to the bar the next week, the owners said they had been looking for me because I had won the open mic night, and they needed to give me my prize. After that, I decided I was ready to find a [singing] group.”

Bass’s love for music started at a young age. As a boy, growing up in inner city New Jersey, Bass’s parents insisted that he go to church every Sunday. “Since I had to go to church, I figured I should find something to like about it. For me, it was girls and music, and somewhere in there was the church stuff.” Bass joined the church choir and started listening to gospel music every chance he got.

In high school, Bass moved to Williamstown and attended Mt. Greylock as part of the ABC program. He had never left the tri-state region and remembers his first trip to the Berkshires to this day. “They loaded us on a bus from New York. Most of us were urban guys and all of sudden there were all these mountains, and the only black folks were the people on the bus.”

Bass spent the next three years at Mt. Greylock, emerging as a strong student and standout athlete. “I played football and basketball, but my real forte was track.” In three years of varsity track, Bass never lost a race. He set numerous school records and became the first athlete from Western Massachusetts to win both state and New England championships. At night, Bass would retire to his room and listen to his records.

After high school, Bass enrolled at Rutgers-Livingston — a new branch of Rutgers that was just a 40-minute drive from his New Jersey home. Within a few weeks, however, Bass knew it wasn’t a good fit.

Determined to transfer to a more rigorous environment, Bass called his guidance counselor at Mt. Greylock. “The first thing he said was, ‘Did you ever think about Williams?’ I said, ‘No man. To go to Williams, you need to be white, have a lot of money, and be super smart.’ He said, ‘That’s not true — a lot of people were surprised you never applied to Williams.’”

Bass applied and got in. The adjustment from Rutgers-Livingston to Williams, however, proved to be a difficult one. “I didn’t do that well on some of my early papers, and one of my professors suggested I choose a different major. That presented a crisis for me. I had chosen English and didn’t know another subject I was interested in. I cried a little and thought about my mother back home — then I started getting angry. I decided, ‘I’m going to be an English major just because this guy told me I can’t do it.’”

In his moment of panic, Bass realized that there was one thing that he knew better than anyone else at Williams: gospel music. “After that, every opportunity I got — didn’t matter what the subject was — I would find a way to bend it to something I loved about music.” Chemistry became interesting because he could apply what he learned to the process of making records. History became interesting because he could imagine how different events affected the creation of music.

Outside the classroom, Bass started joining musicals and launched his own gospel music radio station.

When he left Williams, Bass took a job as an insurance salesman. Every chance he got, however, he would turn on his records or work on his vocals.

After his performance at the Peppermint Lounge, Bass linked up with a quartet and started singing in gigs all over the New York area. When his company transferred him to Washington, DC, Bass found another group.

A few years after moving to DC, Bass left his insurance job in order to learn more about the music industry. He worked at two different radio stations, a record retailer, a distribution company, and a syndicator. He learned how to protect himself as an artist and how to promote his work.

In 1997, Bass released his first solo album: “The Welcome Table.” Since then, he has written over 70 songs, including a single last summer in the wake of the Michael Brown shooting entitled “When Will it End,” which decried the ongoing police violence against black youth.

To this day, Bass regularly sings at churches and performs at a variety of social justice events. His band meets every Monday night at a studio in his basement. Outside of music, Bass has used his status as a singer to reach out to disaffected youth. He has worked with a number of organizations and schools to tackle issues of teen pregnancy, substance abuse, and gun violence.

You can learn more about Bass and hear some of his songs at http://www.reverbnation.com/davebass

Nonprofit Community Service I Andrew Seligsohn I ’89
Youth Volunteer Coordinator I David Battey I ’85
How'd You Get There? MENU