Interested in working on climate change? Think you’ll end up as a researcher or activist working for a nonprofit somewhere? For as long as he can remember, Sam Arons has been interested in the environment. After two years of grad school at UC Berkeley, he sought real-world experience and naturally applied to the nonprofit jobs you’d expect. He also applied to Google.

Seven years later, he is part of a corporate team tasked with reducing Google’s carbon emissions to zero. His work has inspired similar projects at other large companies who together are demonstrating that sustainability and financial wellbeing can go hand in hand.

I caught up with Arons at Google’s San Francisco office to hear his story. 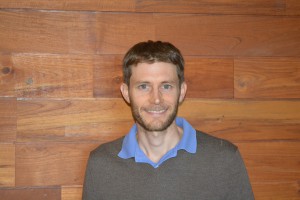 How did you end up at Google?
My first job after graduation was as a math teacher in Morocco. When I was there, I decided that I wanted to go to grad school related to renewable energy and ended up at the Energy and Resources Group at UC Berkeley.

By the end of the masters program, I wasn’t sure if I wanted to go on for a PhD. I applied to a bunch of places, mostly nonprofits. It just sort of worked out that Google was looking for people with a renewable energy background at that time.

What roles have you taken on at Google?
Initially, I was on a general sustainability team. We functioned as an internal consultant, helping different parts of Google do green projects. For example, I worked on a bike-to-work program to encourage employees to ride their bikes and walk more often.

After four years, I switched over to the data center energy and site selection team. Data centers are these massive buildings that are completely full of computers. My team is responsible for figuring out where the buildings will go and then bringing together all of the raw ingredients needed for the building — land, water, sewer, and electricity.

A lot of what I work on now is renewable energy supply. As a company, we have a carbon neutrality commitment. We have been carbon-neutral since 2007, which is partially met by carbon offsets. However, we feel that it is better to have renewables than offsets, so our goal is to increase our usage of renewables from 35% today to 100% over time. We identify renewable energy projects and negotiate contracts with energy producers.

Has Google’s work inspired other companies to follow suit?
Being at Google, the work we do is amplified. We were one of the first tech companies that started doing renewable energy in a big way. Not only did we have a big environmental impact by doing that work ourselves, but we were also able to show other companies that “Hey, this can be done in a cost-effective way.” Now you see others like Microsoft, Apple, Facebook, and Yahoo doing amazing things as well.

Did you see your coursework at Williams building towards a career in environmentalism?
Freshman year I took courses in a lot of different subjects. As I got to senior year, I started to focus down more, and did my senior thesis on wind energy. So to some degree I tailored my courses to my passion for the environment, but I was a physics major because I really liked physics. I didn’t know what I wanted to do for a job, but I thought if I could do well in my physics and other classes, those skills would be useful for a wide range of jobs.”

Were there other career paths that you thought you might follow?
Maybe I wasn’t being as practically minded as I should have been, but I never thought about what job I could get if I did X, Y, or Z. I followed what I was passionate about and what I was interested in. I thought I would do something related to environmental issues, but I didn’t think a lot about what form that would take.

I got exposed to a broader array of people in grad school, and learned about what different career paths in the energy realm were like. There are a lot of paths within the space. I started to think about what I could actually do with this interest, but I didn’t go to Williams or grad school with any of those careers in mind initially. I was passionate about the issues and wanted to learn more about them, and figured I’d find something afterwards.

Are there moments that stick out over the past seven years at Google where you realize the impact you’re having?
One day, when I was on a run, I got this idea that when you look up companies on Google Finance, you should see their environmental performance next to their financial information. I ran the idea past my manager, and he was like “Yeah, that’s a great idea, you should do it.”

So I went out and found a Google engineer who had some spare time, and I negotiated an agreement with this nonprofit which has environmental data on companies, and we got it done. Now if you go onto Google Finance, you will see that information. It was the first time that environmental data has been paired with financial data in a publicly available way.

Do you have any advice for current students, especially those with an environmental focus?
I would say that you should pursue what you’re passionate about. It can be anxiety-provoking not to have your whole future planned out, but that’s OK. Taking the time to really learn and build the skills and indulge yourself in your passion is worthwhile. You don’t know whom you’ll meet along the way. I never even knew that Google was working on environmental issues.

I also get asked a lot about careers in environmental issues, so I put together an FAQs doc, which has a lot of potentially useful resources.