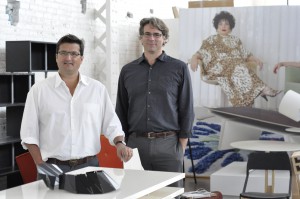 Maurice Blanks, ’87 and John Christakos, ’87, along with classmate Charlie Lazor, ’87, founded Blu Dot, a company that designs and produces contemporary furniture, with the goal of “bringing good design to as many people as possible.”

You are COO and CEO. How are your roles different?

MB: I manage the back-end of the business—manufacturing, sourcing, administration, fulfillment, IT, human resources—and I oversee a product development team. It’s the plumbing within the wall. You don’t see it, but you need it. And we jointly manage design.

JC: I’m the tap-dancer. I handle all the sales, marketing and financial aspects. We manage the overall company direction together.

How have your roles changed?

JC: At the beginning, it was Charlie Lazor and I, and we did everything. But as a company grows, the cells divide and subdivide and things become more focused and granular.

What were you doing before Blu Dot?

JC: After graduation I accepted a job at Bain and Company, but some friends were going to Japan to teach English with OEC and I thought that sounded fun. I actually called Bain and asked if I could defer my job for a year…and they said yes! So Charlie, Maurice and I backpacked through Asia for six months.

MB: I was an art major. I wanted to leave Williams my sophomore year to go to architecture school, but my dad talked me out of it…which was the best thing to ever happen. After traveling with John and Charlie, I went to grad school for architecture, moved to Chicago, and opened my own architecture practice, which I ran for six years before coming to Blu Dot.

JC: Consulting was appealing for the variety. You learn about different businesses and different problems; and you get access to high-level stuff at a young age. It was a great start.

Did you have to put your interest in art and design on hold?

JC: I had a studio in my apartment and I had an exhibit of my sculpture at a gallery in New York while I was at Bain. I didn’t really feel comfortable in the art scene, though, so I went to business school.

What makes you happy about coming to work here?

MB: I control my destiny. There aren’t three levels of management between me and the CEO. Also, we’ve created a great combination of commerce and design. I love walking around the office and seeing all the new designs and prototypes.

JC: It’s the American dream—something that was just an idea as we backpacked around Asia germinated and grew from two people to four, then 25, then 80 people globally!

Do you think the movement towards democratizing design has worked in your favor?

MB: In late 80s and early 90s, there was no access to affordable, modern design. That’s why we started the business.

JC: Then there was an explosion of decorating shows, which was a clear sign that there was an interest in design.

MB: As people become more comfortable with modern design, it expands our customer base. “The rising tide lifts all boats.”

Where did the name Blu Dot come from?

JC: We brainstormed one weekend by fax—there was no email then. I still have the original fax with a list of names that sound like snowboard lines or micro-breweries—Hot House Design, Iron Dog Design. Prince had just changed his name to that nameless, weird graphic symbol and we thought that was an interesting idea—maybe we could be a symbol, too.

One of us suggested a blue dot. Practically, it’s not smart. How do you get listed in the phonebook? How do you even answer your phone? So we added words. Then our graphic designer needed to drop the ‘e’ in blue to make his logo work. We liked it because it was general and didn’t pin us down. And it sounded approachable. Blue has all these nice, low-brow connotations like blue plate special, blue jeans—which was part of the idea for our brand.

Where is Blu Dot going next?

JC: There are two parts to our business. We design under our brand, but also for big retailers like Target and Crate & Barrel, under their brand names. We will continue to nurture both aspects.

MB: We also want to design more broadly and create more pieces for our collection.

How did Williams foster your creative side?

MB: Originally, I thought I’d major in political science or economics, but then I took art history 101-102 and the fall semester was architecture and sculpture, taught by E.J. Johnson. When the lights went down for the first time, it totally redirected my life. He spoke about art and architecture in such an intelligent way that I thought, “I want to do that. I want to learn about stuff like this forever.” Without that class, I probably would be at Morgan Stanley right now.

JC: My mom was an artist and my dad was a factory-owner and entrepreneur, so I always had those interests. Right from the get-go at Williams, I knew I wanted to be an art major, but I felt my dad might be disappointed, so I majored in art and economics, and both programs were great. There were people ahead of me like Michael Govan ’85, and Iv Dell, who were my idols. As a freshman, I’d go to their shows and aspire to do that myself.