Filmmaker I Rachel Kessler I '13

Imagine the Science Quad at 5 a.m. Even on the rowdiest of nights, the pathways would be quiet, the buildings deserted.

It was this time of day her freshman year that Rachel Kessler first realized she could become a filmmaker. She had arrived in the video editing lab early one evening, intent on finishing a piece she was making for a Shakespeare class. For hours Kessler worked, unaware of the time slipping past. “When I finally checked the time, I thought, ‘If I’m having so much fun, this might be worth pursuing.’” 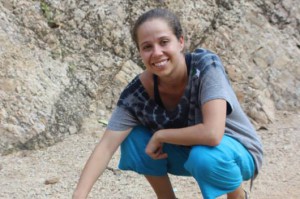 Flash forward four years. Kessler’s in the midst of releasing her second documentary—a story about enslaved children in Thailand who are forced to sell roses to tourists. A former pre-med student who switched her focus to history in her junior year, Kessler balances her time between producing her current project, planning new ones, identifying potential collaborators, and writing a feature film.

I caught up with Kessler in Boston to hear about her journey into film and learn about her experiences creating her most recent documentary.

How did you first get started making movies?
I made my first real documentary senior year. It was about my grandfather, who died when I was 6. Since then I’ve had a nostalgic obsession for this man that I didn’t really get to know.

I got my whole family together, and we spent an entire night telling stories about my grandfather. I turned that conversation into a 45-minute film. I loved the process and figured I should probably keep doing it. 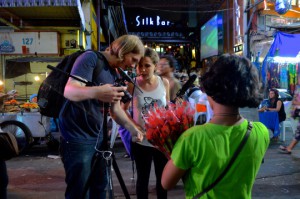 Once you left Williams, how were you able to pursue your love of filmmaking?
I spent my first year out of college in India teaching economics. While I was there, I did a lot of traveling. I went to Bangkok over fall break with my roommate, and we went to this street called Khaosan Road. It’s a big party street with lots of hostels and backpackers. We were there having a good time when I noticed these kids selling roses. It felt weird.

I went back and did more research and it turns out that they were victims of human trafficking.

I launched a Kickstarter campaign and went back with a crew and shot everything in a month.

How did you find out that the kids were victims of trafficking?
A lot of people know, which is the crazy thing about it. When my Kickstarter began, I said that I wanted to make a video about the kids selling roses because it felt weird. People emailed me saying that the kids were actually part of an international trafficking ring. I learned from two of the kids I filmed that they’d been sold by their mom, enslaved, and beaten.

One of the themes I’m struggling with in the film is this idea of “you against the system.” I interviewed a lot of tourists, and they said, “If we don’t give the kids money, they don’t eat tonight.” Some of the tourists even know that if the kids don’t make their quota, they’ll probably get beaten. People know, but they don’t know what to do. When I went there as someone who wanted to do something about it, people wanted to help.

What was the reaction from the Thai government?
Thailand is one of the worst places for trafficking, and they had been getting terrible press about it. It was serendipitous that I arrived at a time when Thailand needed some good PR. I was with Sally Mairs ’13, and we requested an interview with the human trafficking division of the police. The night before the interview they scooped up the kids on the street, tracked down a guy who had been trafficking three of them and put him in jail.

It was their way of saying: “Look what we’re doing. Give us good PR.”

What was going through your head when you heard that the kids had been taken off the street?
I sort of broke down. I started to feel very responsible about what happens to them next because some because some crazy white lady shows up poking around with a camera. It was exciting and good but also scary. Sally’s been doing check-ups and those kids are in a safe, healthy shelter now.

What drew you to this project in particular?
If you walk on Khaosan Road, you can choose to see a place that’s kind of gross and grimy and fun. Or if you look a little harder, there is this “invisible” slavery in plain sight. If you get even closer and get to know the kids, you realize that they can be little shitheads. Or the mom who sold them has made a terrible decision but you don’t know why. What in her past made her do that? Each person is multifaceted, and that makes telling the story interesting because you’re putting together something complicated.

Are there aspects of your Williams education that help you in film?
Absolutely. Williams made me curious. Williams was a place where you could ask crazy, difficult questions and sometimes make an ass of yourself, but always in the spirit of trying to figure something else out.

Advice for people who are thinking about doing something creative on their own?
Research. Go in with all that idealism and naiveté that allows you to do stupid and potentially successful things, but make sure you know what you can handle and that you know what the potholes are that people who don’t do the research fall into.

It’s also helpful to remember that life is a bunch of people on a planet, and you’re just one of them doing your thing. Stepping back and realizing that it’s going to be OK is important.

How have you come to define success?
I try to think more about my happiness than my success. Down the road I’m going to have to feed and clothe myself off of more than my teacher’s savings, so I’m aware that success equals money and things that you can wear and do. But I focus more on feeling happy and fulfilled in what I’m doing.

I never want to get stuck in a job that I feel like I can’t leave because I’m too afraid of what it will feel like to not have stability. So I figure, just never have stability and then I’ll never be afraid.

Clothing Designer (and TV Star) I J.J. O’brien I ’05
International Journalist I Sally Mairs I ’13
How'd You Get There? MENU