Farming Artist I Lucy Rollins I ’12

Lucy Rollins ’12 is a tough person to define. She is a farmer, an artist, an entrepreneur, an activist, an outdoors enthusiast, a teacher, a singer. Two years removed from her Williams graduation, she has returned to Williamstown where she now splits her time between farming, painting, working on a greeting card business, hiking, and attempting to turn an abandoned shed into an art studio. 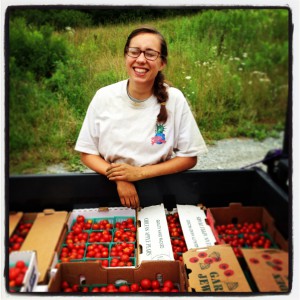 Despite her wide range of interests, Rollins’ main goal is to find ways to slow down time. “I want to give my life time to stand still and breathe. I want to have experiences that pool into places like little swimming holes and for people to naturally move in and out of my life.”

That desire has led Rollins to return to her childhood love for getting her hands dirty. Whether it’s stacking hay or painting canvases, Rollins is deeply engaged in her work. “The things that I’ve gravitated towards allow me to have clear moments when time totally slows down and you can experience the richness of life everyday.”

In some ways Rollins’ story is a battle of competing interests. She came to Williams as a field hockey player, joined an a cappella group, volunteered with Log Lunches, and spent time at the campus garden. Midway through her sophomore year, Rollins realized that something had to give. “I felt like I was skimming the surface with a lot of my classes and trying to fit in so much else. I was jumping into the future and looking back on my time at Williams and wanting it to look very colorful and robust—and I realized that I had to take the sports out.”

As difficult as that decision was, leaving her athletic career behind enabled Rollins to invest fully in other interests. “I slowly sank my teeth into the community and got more involved with the student garden and finally started nourishing my passion for that sort of thing.”

She also began spending more time at the art building. “I barely did art in high school. I’ve always drawn but not so consistently that I could call it a hobby.” By her junior year, however, Rollins had switched her major from biology and psychology to psychology and art to just art. “I shoved everything else out of the way because being in that building and creating something all the time and talking to people about projects was amazing.”

Without the demands of training and practice, Rollins spent one summer helping protect turtles in Greece and another working at the same farm in Williamstown where she’s currently employed.

As graduation neared, Rollins realized she wasn’t ready to put aside art or farming. She took a job at a farm in the Berkshires, but while she was there, she started doing sketches that turned into the greeting card business. After a stint in Wyoming, working for an artist and taking outdoor education classes, she returned to Williamstown.

To Rollins, art and farming have much in common. “In a literal sense they’re both very hands on. They’re also both very repetitive at times, which makes them sort of meditative. When you’re farming you’re taking care of the land the best you can. With art, it’s also a nurturing process. You’re nurturing the ideas in your head and trying to bring them out.”

Rollins acknowledges that she may end up focusing on either art or farming over time, but insists that she’s not in a hurry to make that happen. “I’m falling into a seasonal pattern where I’m farming over the summer and fall, and then I have lots of time for art in the winter.” After the fall harvest, she’s hoping to launch a website for her greeting cards and host a few art shows in the Williamstown area. While the seasonal life may not fit the traditional, one-job, year-round view of the “real world,” it allows Rollins to control her days, pursue her interests, and nurture her sense of self.

More than any promotion or monetary bonus, Rollins sees “success [as] more of a lifestyle—it’s trying to make every day feel longer, not shorter. I’ve been thinking a lot about this idea that people use the term ‘long day’ to mean a bad day. But you can have a good long day. I want to have more good long days and want to redefine what a ‘long day’ is. Time doesn’t have to own you. So I guess my idea of success is sticking it to time.”

Though she believes that “sticking it to time” will look differently for everyone, she emphasized the importance of finding and cherishing those moments where time slows down. For her, that’s often early in the morning or when she’s out on a long hike.

In offering advice for finding fulfilling work, Rollins stresses taking risks and moving outside your comfort zone. “The things I’ve done that I value most involve taking risks. Fixing up the studio I’m working on now seemed like such an insane thing to do. There’s not even a woodstove in there. There are tons of beehives. I don’t know how to fix things like that, but I said, ‘I’ll learn stuff and maybe I’ll end up with a studio that I really love.’”

Over the few weeks that have passed since I interviewed Rollins, I’ve found myself looking back at her life longingly. Her plans are made in nine-month blocks, the length of a lease, and her salary is modest, but she’s pursuing two of her passions and finding a way to weave them together. Maybe being tough to define is a good thing. After all, Rollins is waking up early to pick the same vegetables that Williams students eat, she’s painting when she can, and she’s taking afternoon hikes in the hills of the Berkshires. To top it all off, she’s sticking it to time. It’s hard to imagine life getting much better than that.

Social Entrepreneur I Imran Khoja I ’12
Green Entrepreneurs I Geoff Chapin & Brian Greenfield I 1996, 1998
How'd You Get There? MENU