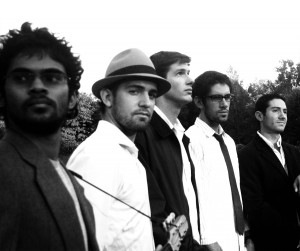 In haiku form, describe the kind of music you play.

Where does the name Darlingside come from?

DS: It’s an adaptation of the phrase “kill your darlings,” a proverb in the literary community which refers to the process of allowing your work to evolve through a willingness to edit out even your favorite bits. Our songwriting teacher at Williams, Bernice Lewis, used to say it often, and “Darlingside” became a friendly play on the “-cide” suffix in words like “homicide” or “fratricide.” 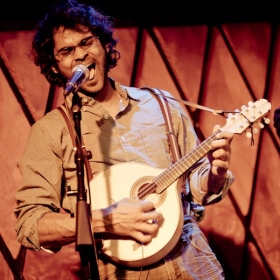 How did Darlingside get its start?

AM: Darlingside’s first iteration was Dan Wollin, ’07, Shea Chen, ’07, Dave, and I. We had toyed with the idea of starting a band during our first few years at Williams, but it wasn’t until we were all on campus during the summer of 2006 that we got things moving. Once the school year started, we invited Harris, Sam and Eli Walker, ’07, into the group. This seven-piece outfit lasted through the graduation of the ’07s. Highlights included playing Williams’ Spring Fling and a critically acclaimed two-stop tour from Washington D.C. to New York City.

After graduation, Dave began playing on the streets of Boston and I traveled abroad to study music for a year. When I returned to the U.S., Dave and I connected with Sam and Harris (who were finishing up their senior year at Williams) and invited Don, who had sung with us in the Octet, to join the re-formed group. In September of 2009, the five of us moved into a house in Hadley, where we have been plugging away ever since.

When you were thinking of becoming professional musicians, what risks and benefits did you weigh?

DM: I was the last band member to sign on. A few years out of college, I made a fairly drastic move from field biology into professional music. My research position was finishing up around the time the band was getting started, and the opportunity to delve into music in such an immersive fashion was too much to pass up. Having a solid degree to fall back on certainly has made taking career risks relatively easy for me.

Blow the House Down by Darlingside. More videos can be found at the band’s website

How do you divide up the responsibility of running a business among the band’s members?

SK: Having a bunch of competent people and no prima donnas helps. We’re also really lucky to have guys with strengths in several different and crucial areas.

Dave designs our website and all the posters, flyers, T-shirts, postcards, letterhead, CD logos, stickers, press sheets, etc. that we need to stock our merch table, publicize our shows, and attract attention from potential new venues and contacts.

Don is in charge of submitting our stuff to blogs for review, signing us up for cool contests, interacting with our fans on Facebook and Fanbridge, and keeping all of our social networking content accurate and up-to-date. He also writes our nearly-monthly newsletter, and lots of our blog posts.

Harris focuses on the music mostly, but he’s also a key ideas-man on the merchandise and design stuff. For example, he coordinated all the elements (stamps, ink, cardboard sleeves, stickers, and the CDs themselves) that went into the packing of our first EP.

I do the bookkeeping and banking, pay the taxes and bills, etc., and keep track of all of the band’s equipment, including our van, Chauncy. I’m in charge of purchasing new stuff, selling old stuff, maintaining stuff, and making sure we’re well-equipped for our gigs—without breaking the bank. I also had a blast setting up and running our little basement recording studio and engineering and mixing our first recordings.

Auyon handles our bookings and day-to-day management, which he deserves special recognition for. He spends countless hours in his room researching new venues and new bands, sending out inquiries and press material, and booking gigs near and far. Once the gigs are booked, he handles all the logistics; and after we’ve headed home, he follows up with nearly every band and club manager to keep us on their radars. I don’t know how he keeps it all straight; it’s an incredibly nuanced process that is unimaginably frustrating, time-consuming, and difficult, and it requires astounding persistence and attention to detail. There’s also lots of strategy to it, and Auyon somehow has figured out how to keep the band moving in the right direction, booking ever-better venues with bigger acts. 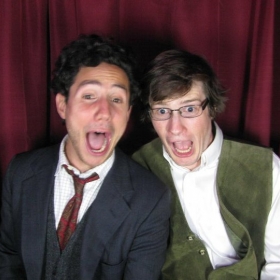 What have been some of the most rewarding moments of band life? Any exciting breaks or events that gave you momentum?

DS: There is simply nothing more rewarding than getting on stage with your best friends and showing a crowd of excited people something you just thought up in your living room. In terms of big breaks and momentum-builders, we’ve had quite a few and they’ve stemmed primarily from two sources. Many have come from the Northampton music community being very good to their own. Connections we’ve made in Northampton have given us opportunities to open for big national acts, offers to headline at the very prestigious Iron Horse Music Hall, warm receptions from college crowds within the Five College consortium, and an enthusiastic and supportive local fan base.

Secondly, it still shocks me sometimes to see how incredible the Williams community is at finding ways to nurture the endeavors of fellow Ephs. We are in a unique position of being able to share our product widely with fellow alumni and students, not just via the Internet but often in person, and it’s been both rewarding and affirming to experience their overwhelming support firsthand. 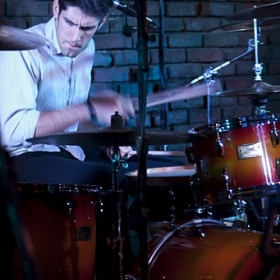 What kind of goals have you set for yourselves?

HP: One of our goals is to create new sounds by exploring an eclectic combination of instruments and styles. We like to take chances in our writing and see how far we can stretch the textures of folk, classical, rock, bluegrass, and even a cappella. But most important to us is sharing this sound with our audiences. We would like to engage in a dialogue with as many listeners as possible.

Who’s your favorite audience to play for?

AM: Our unique instrumentation and fusion of styles endears us to a broad range of audiences. I love our contingent of senior (65+) fans who follow us to our acoustic gigs around the Pioneer Valley, and nothing makes you feel more like a rock star than playing to a screaming crowd of women at Smith or Mount Holyoke. All things considered, though, my favorite audience is our friends, classmates and family who have supported us from the start. My parents live in Kansas City and are planning to come to their first gig this November. I look forward to rocking their faces off.

How did your informal education—clubs, groups, activities, etc.—affect your choices to create this band?

DM: I met most of the guys through the Octet. Our shared a cappella experience influenced not only our vocals and musical arrangements, but also our ability to function as a tight knit unit. We immensely enjoy each others’ company, which enables long hours in the basement rehearsal space, the van, and on cramped stages. Another Williams extracurricular touchstone for the band has been Bernice Lewis’ winter study singer-songwriter class. Through that experience, all five of us had the chance to develop a compositional foundation for our current band songs. We also gained a level of confidence in our ability to consistently produce material that would engage audiences and ourselves over the long term.

Where do you see connections between your Williams education and what you are doing now?

AM: One of Darlingside’s greatest assets is our focused, almost academic approach to the music industry. A young, independent band is no different from any other start-up. As the band’s booker/manager, I often see parallels between the time I devote to researching venues and the hours I used to spend slogging it out in Professor Swoap’s lab poring over murine heart rate data for my biology honors thesis. Our liberal arts experiences have endowed us with a flexibility and work ethic that serves us well in an industry as competitive as music.

You should also check out Darlingside in their most recent article from The Record: