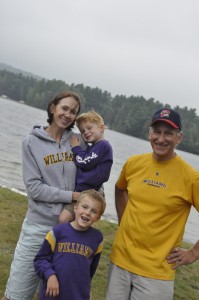 Tracy Heilman is co-founder and vice president of product at ConnectedHealth, a Chicago-based start-up that helps educate consumers about health insurance and match them with plans. Her previous company, Subimo, was acquired by WebMD in 2006.

What is ConnectedHealth and how is it different from Subimo?

At Subimo, we created a series of online healthcare decision support tools to help consumers decide where to go for healthcare, how much it might cost, and how they might choose a health plan. Healthcare can seem pretty complicated, and those decisions can be difficult.

I’m taking the same approach and using it for the health insurance industry at ConnectedHealth. When people have to purchase insurance on their own, we help them think through what’s important—both from a care perspective and from a financial perspective—and we provide them with tools to help them compare different plans.

What’s your specific role at ConnectedHealth?

You say that you’re a risk-averse person. What made you join a start-up?

My company was going through a merger and I knew it wasn’t going to be pretty. The group of people that were forming were people I trusted—and they were interesting—so I knew my job would be interesting. We all kind of grabbed hands and jumped off the cliff together.

What kinds of challenges have you come across in the early stages of building a company?

One is defining focus. It’s really important when you have limited resources. You come in with a big vision and it’s all pie in the sky and then you realize you’re still just five people. How do you eat an elephant? One bite at a time. I don’t like not knowing exactly where we’re headed. It’s uncomfortable, but I’ve learned that it’s part of the process.

What part of your work do you find most fulfilling?

I love to make things. That’s why I left consulting. I would get so engaged in a project and feel like I was contributing to something, and then, once I left, I’d have no idea if they did anything with it. I’ve learned that I need to be able to say “I made that.” I can tell when I’m not in a creative period at work, because then I need to create things at home. I get out my sewing, or whatever, and create.

What is it like to be married to your company, so to speak, and also trying to raise young kids?

I put off having kids for my first few years at Subimo because everything was unknown and I was working like crazy. Eventually, though, I was able to cut back my hours. My partners helped me make it work.

Do you remember what it was like to get your first job? What was your thought process like?

When I was a senior, I knew I wanted to go to the Midwest, so I made a list of alums working in Chicago and wrote them to say I’d be in the area during my winter break and would try to arrange a meeting.

Well, it got to be the last day of my break and, being shy and a little bit of a procrastinator, I hadn’t contacted any of them! So I found the youngest guy on the list, thinking he’d be the least intimidating. It was Bill Holt, class of ’81. I talked to him for a bit and he was working at this start-up healthcare information company called The Sachs Group. I ended up meeting him.

I went in thinking it was just an informational interview, and ended up meeting a number of people at the company, including the president. He said that the best way to find out if they were the kind of people I’d want to work with was to have a beer with them, so I went out with the company that night, and left Chicago with a job offer. I ended up staying at the company for five years—and then, after business school, I went back and worked for the Sachs Group again!

You were a psychology and economics double major. Do you feel like your major had a direct impact on your career path?

I think I could have taken anything at Williams and still come out where I am now. What I learned at Williams was how to think and how to write—and that’s something you learn across all disciplines.

Do you have any advice for students or job-seekers?

In my experience, it’s not so important to focus on the job or the title or the industry. Instead, think about what you can learn. What kinds of things do you like to do? What would you like to learn to do? What do you want to get out of it? What motivates you?

College events are closed to the public for now, with the exception of admission tours. Visitors are welcome outdoors and in select buildings. See the Visit page of our Covid website for full details. The site also includes health and safety information for students, faculty, staff and families.