Community Developer I Stevon Cook I ’08

Election day 2014 is a big day for Williams College. In Massachusetts, Martha Coakley ’75 is running for governor. In Virginia, a pair of Ephs are battling each other for a spot in the U.S. House of Representatives. And in San Francisco, 29-year-old Stevon Cook is making his first bid for elected office as a candidate for the city’s school board. 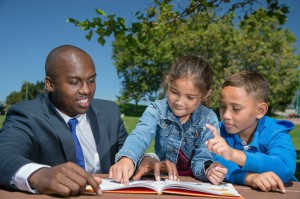 In many ways Cook’s story is the most remarkable. Born and raised in public housing in San Francisco’s Bay View region, Cook struggled to find his way in a world set against him. He was educated in failing public schools, saw drugs and alcohol break apart families of friends and loved ones, and watched as many of his childhood peers lost hope for a better future.

Arriving at Williams in the fall of 2004, Cook took pride in the fact that he had defied the odds. Thousands of miles from his home, Cook saw Williams as the launching point for a life of impact. He harbored visions of himself as the first African-American governor of California.

But Williams was difficult. Cook, who’d always prided himself on being a top student, quickly found himself struggling to stay in the middle of the pack. It wasn’t until junior year that he joined his first extracurricular group — a public service organization called the Griffin Society. “The people who’d be most surprised that I’m running for public office would be the people I went to college with because I was not, not, not that type of person at Williams.”

By his junior year, many of his classmates were preparing to start internships at high-powered banks and consulting firms. Most of them, he knew, would return to Williams their senior fall armed with five-figure signing bonuses for post-graduation jobs. “I bought a bottle of champagne spring of my junior year that I planned on opening when I got a job.” It would take more than a year for Cook to open that bottle.

Unsure of what he wanted to do, Cook began looking for the most prestigious-sounding positions. “There were people in my class getting huge signing bonuses, and I got caught up wanting to do that. I was open to anything that sounded like it would be important.” After missing out on the banking and consulting jobs, he tried his luck with law school. He applied to nine schools and got rejected by them all.

Finally, a month before graduation, a job offer came through. A new organization, called City Hall Fellows, was looking to bring graduates to positions in local government and had an opening in San Francisco. The job sounded important, and Cook liked the idea of working on big issues in his hometown.

When he arrived, however, reality failed to meet his expectations. “I had all these misconceived notions about what I’d be doing and the impact I’d be having given the fact that I didn’t really know anything. On the surface, I was working on these big issues, but I didn’t feel like I had an entry point to have an impact on those issues.”

When the fellowship ended, Cook accepted a job at a Wells Fargo branch, thinking that he could help his community through wealth creation. “I thought I’d be able to meet people coming through the door and help them finance buying their homes and starting businesses. It ended up being entirely a sales job. I didn’t feel like I was serving people well by trying to sell them something that they didn’t need.”

Discouraged, Cook sought counsel from an Eph alum in the area. The alum asked Cook what his most valuable asset was. Cook told him that he owned a few stocks and had an ability to speak in public. The alum shook his head. “No,” he said. ‘Your most valuable asset is your Williams degree. That gives you currency in a lot of places. I want you to write an email to 200 alumni. Out of those, maybe 100 will get back to you. Maybe you’ll build meaningful relationships with three or four. Those are relationships you wouldn’t have access to without Williams.’” Cook took that advice. “It got into my mind to start building relationships. People took an interest in helping me grow professionally and guide me along.”

One of those people was an old teacher of Cook’s from high school. During a game of pick-up basketball, Cook told his former teacher, now the school’s principal, about his professional struggles. The principal said he had an opening for an academic advisor role, and he encouraged Cook to take it.

With only the promise of a paycheck once state funding arrived, Cook left his Wells Fargo job to return to Thurgood Marshall High School. He poured himself into the work, doing odd jobs off Craigslist to pay the bills. Far removed from the prestigious life he envisioned during his senior year at Williams, Cook began to feel happy. “I ran a Saturday school program, I helped out at after-school programs, I was calling parents every night — I felt like we were making some real inroads.”

At the same time, Cook began to realize all of the issues the schools that he grew up in were facing. “I started to see how students got disengaged, why teachers were frustrated with new ideas, and how important it is to get all the stakeholders aligned. I didn’t necessarily plan on running for school board, but I knew that I wanted to do more to help schools. I decided that this was going to be my life’s work.”

As Cook began to commit himself to a modest income in a career he cared about, he found that the things he’d previously valued — money, prestige, fame — started to slip away. “As I started to achieve more in education, I became more comfortable with the idea of not getting rich. I had all these goals before like having a home before I was 30, but I shifted away from that. I feel like I have found my purpose in life now. I know that I’m most happy when I am in a place where I can have a meaningful impact on a complex, challenging space — that’s education for me.”

From Thurgood Marshall, Cook joined the San Francisco Education Fund, where he is in charge of coordinating resources and services for a variety of schools across the city. For the past three and a half years, he has dedicated himself to improving the very schools that raised him. “If our institutions are really going to do all they can to lift people out of poverty, we need to focus on doing the basics well. I got to Williams because at some point along the line, I had people reach out and love me and support me and believe in me. The work has to be rooted in that.”

By mid-July, Cook’s campaign had raised nearly $50,000, much of which came from classmates who had gotten the banking and consulting jobs that had once eluded him. “I talk to consultants who contribute to my campaign and they say, ‘I want you to use this money because I don’t feel like I’m really helping people.’” Those people secured jobs long before graduating, never worried about making rent payments or paying off credit cards, and are on a path towards financial success. Despite that, most are envious of Cook. He doesn’t have a 4.0 GPA or prestigious lines on his résumé. He’s dealt with failure and rejection. But, at the end of the day, he’s happy in his work and making a difference in his community.

Part of Cook’s success is rooted in his initial failures. “For me, it was easy to feel beat down because I wasn’t the top of the class. But through that experience, it was instilled in me that I could take on big projects and be OK with failure and still bounce back.”

“Ultimately, I think finding what you love and doing that is the best way. You hear that from a lot of successful people — Warren Buffet, Bill Gates. It’s easy for them to say because they’re making hella billion dollars. But, as someone who doesn’t make much, I think that is the one true way.”

Political Campaigner | Dave Marsh | ’12
Social Activist I Morgan Goodwin I ’08
How'd You Get There? MENU