College President I Mary Hinton I '92 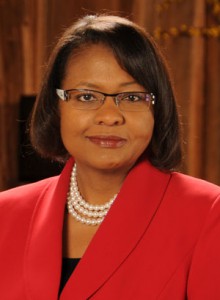 It’s a little before eight o’clock, and the final rays of daylight are quickly fading to darkness. On most college campuses, this time of night on a Friday is welcomed with loud music and drinking games, but here in central Minnesota the scene is different. From all corners of The College of Saint Benedict campus, students dressed in neon t-shirts and sneakers are making their way to the central quad. Instead of getting ready for a night of partying, most of the 2,000 women who make up the all-female student body are preparing to participate in a fun run to kickoff the inauguration weekend for their new president. Less than three months into her tenure and only a month removed from the start of classes, Dr. Mary Hinton has already ingratiated herself with the St. Ben’s community. As she wanders the grounds, a crowd follows—students waiting excitedly to ask her for a picture and faculty and administrators stopping to shake her hand.

Describe this scene to Hinton even a year ago, and she would not have believed that she would ever be at the center of such an event. Through her childhood and four years at Williams, Hinton never imagined a career in higher education much less assuming leadership of a prestigious college. Far from a straight path into academia, Hinton’s career has featured many turning points, nearly all of them unplanned. Or as Hinton described in her Inaugural Address, “I confess that I could not see in front of me at times, but there was a light at my feet.”

Hinton’s journey began in Kittrell, North Carolina, a small town 40 miles northeast of Durham. As a teenager at her local public high school, Hinton walked into her guidance counselor’s office to begin the process of applying to college. Instead of support, “[I was told] that I shouldn’t be thinking about going to college and that as a black woman my only option would be the military.”

With the help of a family her mother worked for, Hinton was able to attend private school and move on to college, but the experience stuck. A fierce advocate of the liberal arts, Hinton often references her upbringing when describing her mission in education. “When my guidance counselor told me that I couldn’t go to college, essentially she was saying that because of my race I was not entitled to the opportunity to be educated and be fully free. A liberal arts education does not train you for a specific job—it equips you to be able to do any job. If you’re really interested in the freedom of another human being, that’s how you educate them—so that no matter what comes along, they’ll be ok.”

Arriving at Williams in the fall of 1988, Hinton received another lesson in the value of the liberal arts. Though she had her heart set on majoring in art history, after receiving a warning from her mom’s cousin that she’d never get a job as an art history graduate, Hinton switched her focus to psychology. “Part of my love of the liberal arts is that I believe you should never tell a young person that they shouldn’t major in something because they won’t get a job.”

Facing the prospect of graduating without a job anyway, Hinton eventually found a position working at an elementary school in Maryland. She worked there for a year but quickly realized it wasn’t her calling.

Hinton decided to pursue a PhD in psychology. Almost instantly she realized it wasn’t a good fit. “You start doing clinical work right away, and you’d hear these stories that were just heartbreaking. I didn’t feel like I had enough life experience on my own at that point to direct someone else’s life.”

Hinton stayed on to complete the master’s portion of her degree, but dropped the PhD and got a job at an educational policy group instead. “I knew I wanted to impact the lives of the kids I’d interacted with through teaching and clinical psychology but direct service was not going to be the way. I thought that policy might be.” Hinton was right—she found her calling in the policy world.

For the next few years, Hinton traveled the country, testing different academic theories and using the results to develop educational programs. Through that work, Hinton linked up with the founder of Replications, a program that allowed would-be principals and teachers to study successful inner city schools for a year before then opening schools of their own. Hinton joined the company, and, over the course of the next several years, helped open 22 schools in New York and Baltimore.

“I wasn’t teaching but I was close enough to see why my work mattered. For me, that was important—that I could go to a school and see kids’ faces and know that if it wasn’t for my work, they wouldn’t be there.”

By this point, Hinton had started a family and bought a house. She was making good money doing work she enjoyed and found meaningful. Out of pure curiosity, Hinton decided to take a night class at nearby Fordham University. “I wanted to do what I went to Williams for in the first place, to study something for the sake of studying it.”

Hinton enrolled in a religion class. When she enjoyed the first class, she signed up for a second. Before long, she decided to go for a PhD. Just as Hinton was completing her dissertation, she stumbled upon an ad for a one-year job as a professor at nearby Misericordia University. “I thought, ‘I’ll apply just to see what happens.’”

Hinton got the job. While maintaining a few educational consulting projects on the side, Hinton taught two classes and absolutely loved it. “I was as good a college professor as I was a bad elementary school teacher.” When the University offered her a tenure-track faculty position, Hinton didn’t flinch. Her salary as a professor was less than half what she had been making before, but to Hinton, the financial risk was worth the passion she felt for her work.

When the Mount St. Mary’s president announced his retirement in the fall of 2013, he encouraged Hinton to start applying to presidencies. Saint Ben’s was the only school she looked at. “[Saint Ben’s] is like Williams in that it’s committed to the liberal arts, but it’s in central Minnesota, and it’s all women.”

Hinton applied for the job, survived a blizzard during her final round interview, and was hired a few weeks later. She moved to Minnesota in July and just completed her first semester on campus.

Reflecting back on the many steps of her journey, Hinton says, “At some point, I consciously decided to let go of what other people think of as success, but that doesn’t mean it’s easy—it’s something I still struggle with.”

You can read Hinton’s Inaugural Address at St. Ben’s here.

Media Marketer-Musician I Tom Sikes I ’11
Organic Farming Icon I Eliot Coleman I ’61
How'd You Get There? MENU