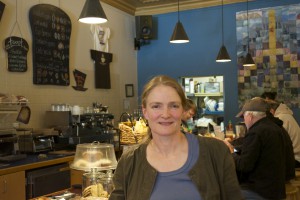 What is a legitimate job? If you spend four years at an academically elite institution that costs tens of thousands of dollars to attend, are you obligated to do something big and world-changing? If so, what qualifies as big and world-changing? For the past two-and-a-half decades, Julie McGuire has been grappling with these questions.

Following graduation, McGuire put her career aspirations on hold in favor of a “gap year” filled with excursions to Europe and Australia. “When I was a senior, I very intentionally did not run around and try to figure out what I was going to do because I had already identified that I was going to take some time off.”

McGuire had vague plans for her return—move to New York, find a job in international business, begin “real life.” “During the time I was traveling abroad, my girlfriend who was living in New York took a job in Japan, so there wasn’t anywhere for me to drop my bags in New York. I moved in with my sister in Southern California instead.”

As a way of covering her living expenses while she searched for a “real job,” McGuire took a position as a server at a local coffee shop. “When I took the job, two things came to mind. One was that I would just do this job until I find a real job. The second was that I’ve always enjoyed this kind of coffee — I’d love to know how to make it.”

Weeks turned into months, and McGuire’s “real job” prospects remained thin: “I didn’t even know what field I was looking for.” Meanwhile, her work at the coffee shop went from part-time to full-time, and, much to her surprise, McGuire found herself drawn to the work. She enjoyed the way the coffee shop brought the community together, and the way that her work as a server allowed her to interact with different types of people.

After a year at the coffee shop, a pair of regular customers approached McGuire about helping them open a new coffee shop. While she politely declined their invitation, the offer inspired a new idea: “I figured, ‘If I can run their coffee shop, why can’t I run my own?’”

For McGuire, the idea of opening her own coffee shop was invigorating. She began imagining how the shop would look, how the space would function. But something held her back. “I kept asking, ‘Is this a real job? Is it valid or valuable enough to go from a school like Williams to running a coffee shop?’” McGuire couldn’t answer the question directly, so she decided that opening a coffee shop would be ok to do for a little while — another break before embarking on her “real career.”

“The transformation in my mind from not real job to real job is what made the whole thing possible. Part of that was a realization that, ‘I’m essentially a waitress, and I like what I do. I like how this makes people feel. I like that the quality of the product is so fantastic. I like learning about the coffee.’”

McGuire, a native of Iowa, had never planned on returning home. Because of her other ambitions in international business, she had always assumed that she would end up on one of the two coasts. But, as the coffee shop idea began to solidify, the pull towards home intensified. McGuire was familiar with the Des Moines market, and being close to her family offered a support network to help get the business off the ground.

McGuire moved back to Iowa and drafted a business plan. She spent two years refining the details of the plan before she was able to secure financing for the shop, but at last, four years after graduation, Zanzibar’s Coffee Adventure opened for business.

“Although I kept talking about only doing this for five years, I didn’t really have a plan for what I’d do after five years. Once the business opened, all of my energy was consumed in getting to the next day. The next thing I knew I was hitting 10- and 20-year marks.”

Looking back at her two decades as a small business owner, McGuire still struggles with the idea of whether she is “successful enough.” “I just passed 21 years running a profitable business. To some people my success is minimal or shortsighted. I don’t have multiple locations. I don’t have a fleet of trucks making deliveries. I’m not also involved in city council. I’m not making so much money that I can make major contributions to any of the causes in the area.”

But, to McGuire, true success is not determined by those external metrics. “You’ve got to have the full picture. Part of my definition of success here is that I add value to my community, I add value to my own life, and I’m living a sustainable existence.” Whenever McGuire feels pressure to open new locations, she makes sure to step back and determine whether expansion is something that actually matches her aspirations.

When asked about her advice for current students, McGuire returned to her experience of exploring and finding her own way. “The first two, three, five years of your life out of college should be an exploration. Don’t be afraid to step away — don’t be afraid to start down a path and say, ‘What was I thinking?’ There are a lot of ways to get where you’re going. We get in a panic that we’re supposed to be doing something important. Do something — that is important. Don’t worry about doing ‘something important’.”

You can learn more about McGuire’s story and Zanzibar’s Coffee Adventure at http://www.zanzibarscoffee.com.

Youth Volunteer Coordinator I David Battey I ’85
Music Industry Project Manager I Katie Holmes I ’13
How'd You Get There? MENU