After starring on the most recent season of “The Bachelorette,” he’s become a household name across teenage America. He has tens of thousands of Instagram followers and can hardly take the train without being stopped for a picture.

For more than half a decade, though, J.J. O’brien’s post-Williams life looked much like that of other economics majors. He worked in consulting, in private equity, went to Stanford Business School, and began to feel like he was living an “expected” life. His successes were propelling him up a seemingly prestigious ladder, but he wasn’t happy. The “success” he was achieving did not align with his interests or goals.

So O’brien began a process of self-reflection. A year out of business school, his questioning led him to start his own clothing design company, which he returned to following his stint as a TV star. I caught up with O’brien near his apartment in San Francisco to hear about his latest venture and learn about the reflective process that got him there. 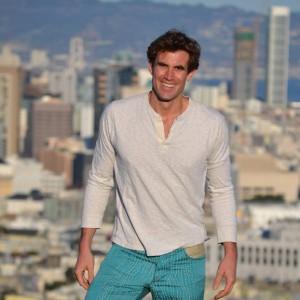 What has your journey after Williams looked like?
When I was at Williams, I felt my only options were consulting or banking. I ended up working at Parthenon my junior summer and for two years after graduation. About a year in, I started getting restless. I knew it wasn’t what I wanted to do long term. After a year working in Australia at a private equity firm, I decided to apply to business school, mainly as a reset button to help me figure out what I wanted to do.

I got into Stanford and went there with this idea that, “I didn’t like what I was doing before; what do I want to do?” Business school is a great opportunity to step back and reevaluate where you want your life to go.

A year out of business school, most of the department I was working for moved to DC, and I thought, “Here’s a perfect opportunity to go on my own.” I’d been making clothes for a while, and people were encouraging me to do that full time.

When I started, I felt like there was a need for a brand in the rave/EDM space. I still believe that’s the case, but a lot of the stuff I was creating was probably too niche. Now I’m trying to partner with social media personalities and put together collections around them. Can we take someone with two million Vine followers and create products to allow them to monetize and leverage their marketing position?

How has the business been going?
It’s ups and downs — totally a roller coaster. Growing a brand is way different than growing a tech company—you don’t hit a big inflection point, or if you do you can’t actually meet demand that fast.

The biggest challenges are staying motivated, putting structure around things, and finding people to bounce ideas off of. At Williams and working in consulting, I always pulled late nights, but now it’s tough because a lot of the deadlines feel like they are more flexible.

Was there a moment early on that made you thankful you made the leap?
Last year, at Burning Man, I remember looking out over the crowd and seeing five people I didn’t know wearing clothes I’d made.

Did you always want to start a business?
No. I knew I wanted to do something creative. I was honestly pretty fearful of starting something on my own. I was much more risk-averse at Williams than I am now.

People grab whatever’s easiest, but figuring out what actually motivates you is important. I wish I had asked myself earlier, “When all is said and done, what is the long term goal that I’m working for?”

At business school it sounds like there was an environment conducive to questioning. What were some of the strategies for facilitating that?
My two favorite questions at business school were: “If you won the lottery tomorrow, what would you do?” Not that you can totally ignore money, but are you on the path towards something that you really want to do. The second was based on a story that an alum told me. He took a piece of paper and drew a dot in the middle and said to think of the dot as me: “You’re in this arena with some of the most talented people in the world in your peer group. What is the one thing that you’re better at than other people here? Figure out what that thing is and go out and build a career leveraging that.”

How have you come to define success?
For me success is a combination of asking, am I affording myself the lifestyle I want, am I happy, and am I working towards something great?

Green Entrepreneurs I Geoff Chapin & Brian Greenfield I 1996, 1998
Filmmaker I Rachel Kessler I ’13
How'd You Get There? MENU