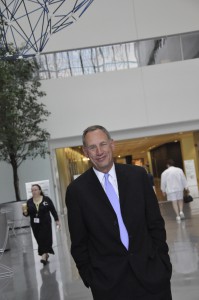 Dr. Toby Cosgrove is the CEO and president of The Cleveland Clinic in Cleveland, Ohio. He joined the clinic in 1975 and before becoming CEO, was chairman of the Department of Thoracic and Cardiovascular Surgery. He is an international leader in pioneering heart surgery procedures, holding six patents for medical devices and instruments.

You have been at the Cleveland Clinic 35 years and are now CEO. What’s it like to have spent such a large part of your career at this institution?
When I came here, we were 120 doctors and one hospital. We’re now 2,700 doctors and about 40,000 employees. We have facilities from Las Vegas to Abu Dhabi, from Canada to Florida. And here in Cleveland, we have about 10 hospitals. So I’ve seen some amazing growth. Our model of care is one of the reasons why we’re so successful. We’re all salaried employees. There’s no tenure. We have one-year contracts and annual professional reviews. Not everyone gets to stay. And that helps drive the quality of the institution. It’s a very uncommon model.

Life as a CEO must be pretty different from that of a surgeon. What’s the most exciting part about your work now?
I work in a very dynamic field, and we are one of the leaders in that field. I’m responsible for leading this organization and helping develop its strategy going forward. I’m also the face of the organization. I report the outside world to the inside world and the inside world to outside world. I’m the bridge that goes both ways.

Were you always interested in medicine?
Yes. I always knew I wanted to be a surgeon. When I was eight, I saw a surgeon in a mask and cap and thought I’d look good in one too.

How do you keep educating yourself?
The thing I find most stimulating is finding new ideas. When I was a heart surgeon, I traveled around the world to observe other surgeons. I took little ideas from here, little ideas from there, and melded them into something different and bigger, kind of like an artist does. When I was named CEO, I told everybody in the clinic that I expect them to take a trip someplace every year and bring back their findings.

At Williams you were a history major. Isn’t that unusual for a pre-med student?
Yes. It seemed like they pushed all pre-med students toward majoring in chemistry. But I thought chemistry was pretty awful…and it didn’t like me any better. So I did the minimum amount of chemistry and majored in history!

How did your Williams experience prepare you for your job here?
Williams exposed me to the most diversely talented group of people with whom I’ve ever been associated. It was also very difficult for me. I came from a high school were only 13% of the students went to college. And it was a challenge, because I’m dyslexic, but I didn’t know it until I had finished my formal education. So, for me, Williams was a real grind. It taught me perseverance because I had to work very hard. I developed a work ethic.
The other thing I did was play basketball, on a very good basketball team. It taught me about team play and furthered my interest in team activities. Cardiac surgery is an enormous team event. The Cleveland Clinic is a big-team event. If you have to be an individual, I don’t think modern medicine is for you.

The Cleveland Clinic has a reputation for outstanding architecture. Can you trace your interest in art and architecture back to Williams?
No question. At Williams I audited art history classes. It raised my consciousness to a point where I’ve continued to pursue it. Amazingly, I now get to hobnob with some of the greatest architects in the world and hope they will build our buildings.

There’s a math professor at Williams named Ed Burger, who teaches a class on failure. It’s a foreign concept to many Williams students. But have you learned from any experiences with failure?
Yes, I gave a Convocation talk on the topic! The title was What’s Your G.Q.?, meaning Guts Quotient. I talked about failure—all the ways I’d failed and all the lessons I’d learned from my failures. Probably most of the people in the audience hadn’t failed yet, but I told them that they should be ready, because they were about to. I told them what is important is how they use failure to move forward. I think you learn more from failure than success—certainly in surgery.
For me, Williams was a crucible. So was Vietnam. I wasn’t sure if I was going to make it through either experience. I don’t think you get very far by staying in your comfort zone.

How does it feel to be part of the Williams alumni network? How have your relationships with your peers benefited you?
I think your classmates raise the level of expectations for you as much as your professors do. That’s what Williams does—raises the level of expectations higher than you would have done yourself. I figured if my classmates could go on and do these great things, why couldn’t I?