Anthropologist I Catherine Bolten I '98 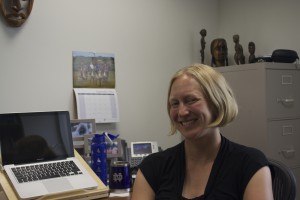 It was fall of her senior year, and Catherine Bolten was feeling good. She had just returned from a summer-long research trip to Botswana and was inspired and confident — for the first time in her life, Bolten knew what she wanted to do.

“I marched into my professor’s office and said, ‘I want to go to graduate school in anthropology.’ He said, ‘That’s absolutely the wrong thing to do. You’ll spend the best of years of your twenties in school, you’ll come out at the end broke and probably won’t get a job.’ I said, ‘But I still want to do it. I can’t imagine not being an anthropologist.’”

Flash forward fifteen years, and Bolten is an anthropology professor at Notre Dame. Her work has spanned both the professional and academic arenas and has taken her around the world, most notably to Southern and Western Africa. Bolten’s research has focused on the cultural ramifications of Sierra Leone’s decade-long civil war.

I caught up with Bolten at Notre Dame to learn about life as an anthropologist and hear more about her winding road into academia.

Immediately after graduation, I worked for the New York City Parks Department for a year, helping create and maintain an urban forest to combat air pollution.

Then I worked for Physicians for Social Responsibility. I was researching and writing reports on abuses of protests. We looked at the WTO protests in Seattle. The supposed tear gas that was used there was actually paint thinner, and that’s why so many people got sick.

Then I worked for the World Food Program at the United Nations. I was in Southern Africa for two months, examining the school feeding programs and figuring out the impact they were having.

I finally gave way to my inner instinct and got a PhD in anthropology and came into academia.

Peter Just’s Anthropology 101 class. I took that to fill up my people and cultures requirement as a freshman.

Did your trip to Botswana while you were at Williams encourage you to go back to Africa when you were working on your PhD?

Definitely. Once I went to Botswana, I was hooked on Africa and was never going to work anywhere else.

My best friend in graduate school was from Sierra Leone, and I was looking for a subject for my research. She said, ‘We’re just emerging from a civil war, and the country needs all the help we can get,’ so I decided to go there.

I’ve been to Sierra Leone six different times over the past decade, including living there for 15 months in 2005 when I was working on my dissertation. I went back earlier this summer for a new project, which unfortunately dovetails with the Ebola epidemic because I’m studying bush meat. When I was conceiving of the project, I had no idea that it would be so devastating.

What has been the focus on your research on Sierra Leone?

My first book was on how people understood their moral obligations to one another during the war within this framework that everyone referred to as love. It’s not necessarily romance—it’s people who have this connection because they feed each other, look after each other, will sacrifice for each other.

People navigated the war in ways that on the surface would look incredibly immoral—making alliances with rebels, marrying them, protecting them, becoming a rebel. Except when they tell these stories, they resonate with a morally exemplary world of ‘love is what saved my life, and I was doing things to save my life.’

The project I’m writing up now is about youth and their employment and political participation. After the war, adults were incredibly afraid of young people because young people largely comprised the rebel army. There was a question of, ‘how do we coax the youth to accept the old social order where power largely resides with the elders?’

What I found out is that young people don’t want to destroy the system. They want to belong to it—the youth are trying to get the adults to take them seriously, but all the tools at their disposal are tools that the elders can’t use, don’t understand, and are afraid of, so they interpret what the young people are doing as revolutionary. They’re speaking English, wearing jeans, and talking on cell phones.

What does the research look like when you’re in Sierra Leone?

A lot of running around interviewing people, hanging out with them, going to events, going about the course of daily life and just observing what’s going on around me.

One of the reasons I’ve been working in Sierra Leone so long is that I’m so comfortable there, and I can go back and pick up where I left off. I can speak the language and dress like a local person. It’s a happy place for me to be.

How did you decide that academia was right for you?

Within three weeks of working at the Parks Department, I knew that it wasn’t for me. I was slotted into running programs that I saw as flawed in important ways, but it wasn’t my place to change them. I ran up against the same thing when I was working for the World Food Program. There wasn’t enough self-analysis going on because the officials didn’t seem to care about the damage they were doing in local communities by importing all of this food and undermining local agricultural efforts.

In academia I can ask basic, fundamental questions about what’s going on—but only after I’ve been somewhere long enough to know that those are the most important questions to ask.

What advice do you give students who are preparing for the real world?

Take advantage of every opportunity that comes your way, whether that’s organizing an event or going abroad. Go places and do things that challenge you in different ways.

Also, if you accidentally approach an elephant, and its ears are forward, and it snuffs at you and starts running, you better take off because it will flatten you. That’s a really important life skill.

The Geologist Designer I Carissa Carter I ’01
Nonprofit Community Service I Andrew Seligsohn I ’89
How'd You Get There? MENU